With more than 200 million songs streamed since the debut of his 2016 Album Panorama, French DJ Møme is breaking out of Europe and turning up his global presence with a new focus on the United States. Currently on a North American tour with Gramatik until mid May, Møme ventured to Williamsburg this past Wednesday night for a headline show at Rough Trade (64 N 9th St) and we sat down with him to explain his motivations and process for creating his extremely popular sounds. He says fame has not changed his general musical equation and the his organic love of music continues to be his guide.

Greenpointers: You are originally from the south of France, but you were producing music in Australia. Where are you currently based?

Møme: I’m Back in Europe. I moved to Australia three years ago to write my first album but now I’m back in France and I’m touring a lot. I had 150 gigs last year and I have a lot of gigs overseas, it was a very busy year. I’m not supposed to be touring right now, I’m supposed to be writing my new record, [so] things are very busy. END_OF_DOCUMENT_TOKEN_TO_BE_REPLACED

If I had to pick one house in Greenpoint to set a horror movie in it would be the big old house set back off the street at the corner of Oak and Guernsey. The red brick facade, spooky wooden double doors, cast iron railings at the building’s entrance, as well as the iron fence and gate at lawn’s edge all are original, dating to the house’s construction in 1887.

The house has a fascinating history and it is connected to an equally fascinating man who had the presidency of the United States stolen from him in 1876: Samuel Tilden. Tilden is probably one of the people who gets the least credit for making Greenpoint great. Tilden was an absolutely brilliant corporate lawyer who knew a good investment when he saw one. He bought a huge piece of land before the Civil War in Greenpoint that covered an area from Calyer Street to Milton and east to Leonard Street including the land that St. Anthony’s church now sits on. Tilden did a lot for our state. He broke the corrupt Boss Tweed ring and helped write our state Constitution. In 1876 he really should have been elected president, but lost when his party, the Democrats, cut a dirty back room deal that ended reconstruction and sold him out. END_OF_DOCUMENT_TOKEN_TO_BE_REPLACED 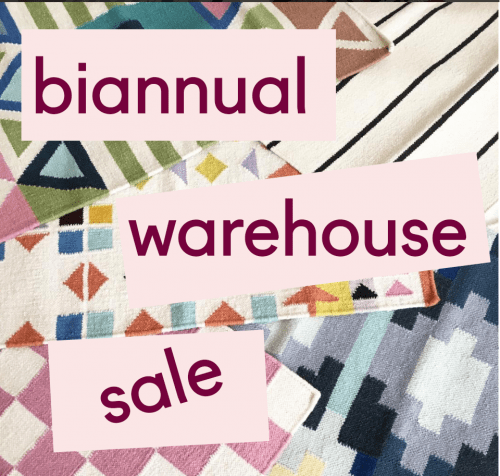 Locally-based online retailer Aelfie is offering some pretty great deals for their biannual warehouse sale this weekend in Greenpoint. Get 30-75% off discontinued styles, floor samples, one-offs, and overstock. Their usual merch includes fun geometric rugs, pillows, bedding and a cheeky assortment of housewares.

If you can’t make it, use the code “FlyingCarpet” at aelfie.com for 10% off

I’ve been following Mr. Hancock since we were both living in Austin in the mid ’90s. All those gimmicky rockabilly bands floating around Brooklyn lately can’t hold a candle to him. END_OF_DOCUMENT_TOKEN_TO_BE_REPLACED