The bakery previously operated at 28 Herbert St. for one year on the other side of the Brooklyn Queens Expressway and received positive feedback, but when the L train shutdown was announced, owners and sisters Agata and Paulina began seeking a new location. “We’ve been hearing all of the stories about the subway and it shutting down next year,” Agata said.

“We grew up strictly vegetarian in Warsaw, Poland. Our parents are very, very compassionate about animals, so we grew up loving animals and that’s how it started in our home,” she said.

Agata and Paulina’s mother and Agata’s 12-years-old daughter also help out with baking, “It’s a three and a half women operation…all of us are vegan, for the past 15 to 20 years,” Agata said.

Greenpoint has a long Polish history and many Polish-owned businesses have closed in the area recently, but the local community wasn’t the deciding factor on their new location as much as a fair rental price. “Growing up our parents were in the states, and when we moved here, they moved back,” Agata said.

Birthday cakes, cheesecakes, cannolis and crepes are the bakery’s best sellers, but are not the types of food that come to mind when omnivores think of veganism, leaving some customers skeptical at first. “People always ask if the food is really 100 percent vegan,” Agata said. END_OF_DOCUMENT_TOKEN_TO_BE_REPLACED 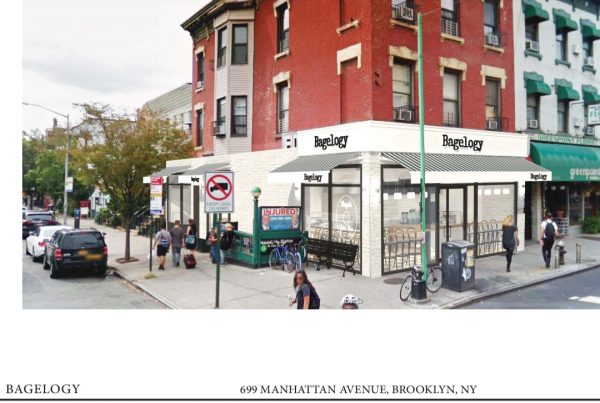 A 24-hour cafe featuring hand-rolled bagels and a full-scale juice bar named Bagelogy is scheduled to open early next year at 699 Manhattan Ave.

The new cafe will be housed in three former commercial stores, including the former Greenpoint Finest Deli in the front, and will be outfitted with porcelain tiles, custom-designed tables, and floor-to-ceiling windows.

Owner Sam Kaplan, who was born and raised on Norman Avenue, is in the process of adding bathrooms and seating capacity for 30 customers in the space with the help of an architectural team.

Shutters Pulled on Cafe Pistachio and Bread for the Eater

A couple of relatively new Greenpoint eateries sadly seem to have closed their doors recently.

Bread for the Eater (168 Driggs Ave.) went dark on us in December. When we got in touch with the owner he told us that one of the partners had pulled out leaving behind issues with the lease which may have to go to court. Sadly the restaurant appears to have been closed ever since.  Such a shame as we were hanging out for a patty melt in their Gold Room! END_OF_DOCUMENT_TOKEN_TO_BE_REPLACED Greenpoint was buzzing with caffeine and creativity. Nine Greenpoint coffee shops participated and we hit each and every one! Coffee lovers enjoyed an evening of local cafés open late with curated cultural events.

Thanks to everyone who came out, to Chermelle for her tireless efforts putting all the events together and to our sponsoring coffee shops: Café Grumpy, Charlotte Patisserie, Tar Pit Coffee Shop, Champion Coffee, Cafe Edna and SPINA.

I know I shouldn’t pick favorites so I’ll just say the evening started out on a (sugar) high note at Champion Coffee. Manager Mark wanted to create a menu that pulled from different food makers in the area. He hit the nail on the head with his Cold Brew Tiramisu made with Peter Pan Glazed Old Fashioned Donuts, Mascarpone Cheese and Rum! I hope they keep that on the menu! END_OF_DOCUMENT_TOKEN_TO_BE_REPLACED