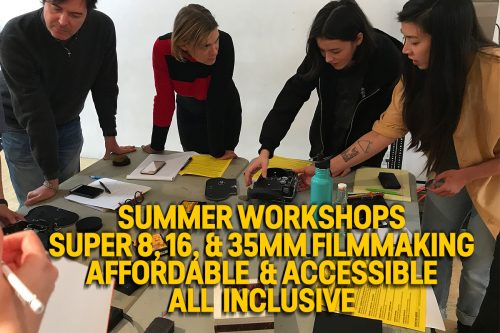 Non-profit cinema group Mono No Aware are leading a series of filmmaking workshops starting next month, starting in June. You can learn how to shoot stuff not on a phone, but on real actual film (yes, that still exists). A few of the workshops are already sold out, but there are still a few spots available in the other classes, or you can join the waitlist. The classes meet at either Mono No Aware (33 Flatbush Ave) or at Center For Performance Research (361 Manhattan Ave). So for just a couple hundred bucks you can learn how to be the next Woody Allen… er, the next Quentin Tarantino… er, just be whatever kind of filmmaker you want to be, just hopefully not a scumbag.  END_OF_DOCUMENT_TOKEN_TO_BE_REPLACED

END_OF_DOCUMENT_TOKEN_TO_BE_REPLACED

I am always amazed at the creativity of people around here. It seems like everyday I’m reading about a cool new project or better yet, seeing the fruits of someone’s labor and passion blossoming on stage, screen, page, or canvas. The latest to come along and get me excited is Prism, a (hopefully) forthcoming anthology film by six local filmmakers. I say “hopefully” because there is an Indiegogo campaign underway to raise funds. I also had the chance to speak with the project’s producer Anna Dale-Meunier. You’re going to want to learn more about this one, believe me. END_OF_DOCUMENT_TOKEN_TO_BE_REPLACED

Maryam Zaringhalam, a Ph.D. candidate at Rockefeller, spends the majority of her time in a lab, studying the molecular biology of yeast. But in her day-to-day social life, she surrounds herself with artists, musicians, and other creatives.  She started the blog, Artlab, to bridge the gap between the two worlds that she often found herself straddling– the artificially disparate realms of art and science. END_OF_DOCUMENT_TOKEN_TO_BE_REPLACED

Here is a little teaser we made to give you an idea of how AWESOME our Greenpointers Neon Sign documentary will be! If you want to see the full documentary then please make a donation in any amount to our fundraiser – so you can be a part of this awesome project. We will be forever grateful – thanks in advance… NEON!

We have less than 2 weeks left and are halfway there! Learn more about our project on Kickstarter. 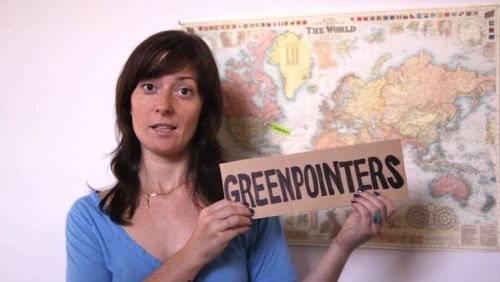 You may have noticed that we revamped our logo into a Neon font. It was all in preparation for an amazing project that I want to tell you about – Greenpointers Neon Sign Documentary.

It all started when we realized that our sign sucks…

We decided to get a badass NEON sign, which we can take to all of our events and markets, a sign that reflects who we are and what we believe in – local MADE IN NYC craftsmanship – and of course document the process from start to finish with the direction of the talented Miguel A. Rodriguez (my best friend in the entire world!) 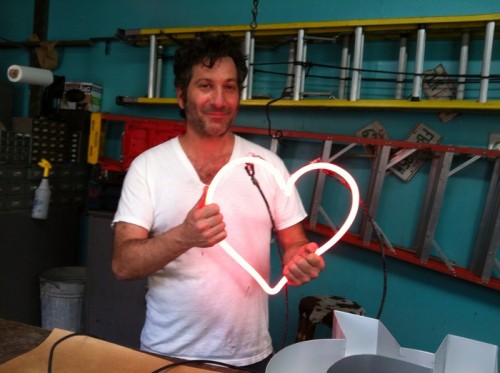 Our Neon Sign Documentary will star Robbie Ingui of Artistic Neon, a 2nd generation Neon Sign Maker. This guy is super talented, hilarious and has thee best NY accent ever! Not only will we film him making our sign and teaching us about the process, but we will also interview his father (in upstate NY) and Thomas Rinaldi, who wrote the amazing book New York Neon to learn about the history of Neon Sign Making and how it has created a unique visual landscape here for the past 100 years.

If you think this project rules, then please consider making a donation to our Kickstarter Fundraiser, which launches today and ends on 11/10/2013.

Our goal is to raise $3000 to create this short documentary and there are many awesome rewards for funding – including rice balls.

For more info, check out our Greenpointers Neon Sign Documentary Kickstarter page AND thanks in advance for your support! 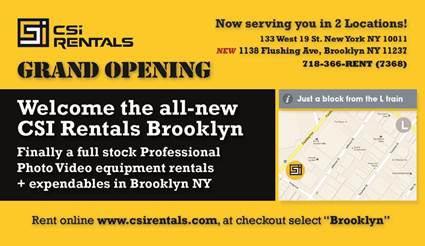 You asked, we listened. The popular fast growing art and photo neighborhoods of Bushwick, Williamsburg and Greenpoint have become the home of many young professional photographers, movie makers and artists. In addition to the new look of the neighborhood with new restaurants, bars and clubs opening daily on every corner, many commercial sites are now occupied by state of the art photo studios and sound stages.

Here is CSI Rentals to fill in the missing piece of the puzzle in the area – equipment rentals and expendables! 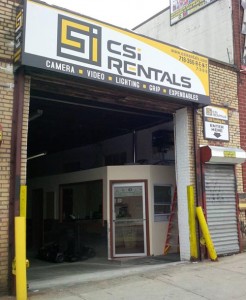 CSI Rentals, who has earned a sterling reputation at its NYC Location by serving the photo and video industry for the past 5 years with the latest gear, is now adding an additional location in the Williamsburg/Bushwick area with a full stock of rental equipment for photo video and cinema shoots. CSI Rentals Brooklyn will also feature a full stock of expendables needed for photo and video shoots including a full line of seamless paper, foam boards, gaffers tapes, gels etc.

CSI Rentals Brooklyn is located in the heart of Brooklyn’s art and photo industry at 1138 Flushing Ave, which is 1 block from the L train (Jefferson St / Wyckoff Ave Stop).

It’s at ground level with convenient loading options, lots of parking space, truck drive in for easy load and unload and also offers delivery and pick up in Brooklyn and Manhattan.

CSI Rentals now offers One Way Rentals where you can pick up at one location and return to another at the same rate!