Community groups such as the Newtown Creek Alliance have dubbed the EPA’s proposal the ‘No Action Plan‘ for lacking commitment to fully rid the three mile tributary to the East River of the raw sewage that overflows into the water during rain episodes. END_OF_DOCUMENT_TOKEN_TO_BE_REPLACED

The Environmental Protection Agency released a control plan for Newtown Creek to divert 61 percent of the raw sewage and wastewater that overflows into the superfund site each year.

END_OF_DOCUMENT_TOKEN_TO_BE_REPLACED

No, Bill Murray has not announced any further bartending engagements, but his son’s restaurant, 21 Greenpoint got some good press this week! END_OF_DOCUMENT_TOKEN_TO_BE_REPLACED

Recent city investigations have revealed new information about two major health concerns for Greenpoint residents: details on the contaminants—and the plans for clean-up—in one of the nation’s most polluted waterways, Newtown Creek; and the locations of and possible health problems associated with Monsanto’s potentially cancer-causing Roundup, which can be found in many of Greenpoint’s green spaces.

END_OF_DOCUMENT_TOKEN_TO_BE_REPLACED 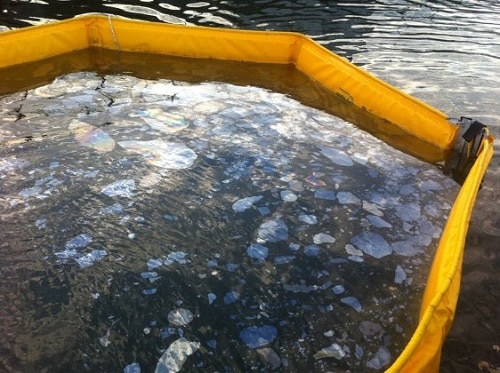 In 1978 a US Coast Guard helicopter on a routine check spotted oil spilling into Newtown Creek. An estimated 30 million gallons leaked into the soil and water, causing health and environmental problems to the residents of Greenpoint – human and otherwise – ever since.

This week, 36 years after the spill was first noticed, the government will receive more money to clean up the site from the people responsible for turning the creek into a polluted waterway. On Tuesday, the US government reached a settlement with Getty Petroleum which will pump an additional $16 million into the clean up of the designated Superfund site. As reported in the New York Post, Getty filed for bankruptcy back in 2011 and the federal government will receive the $16 million as part of that process.

END_OF_DOCUMENT_TOKEN_TO_BE_REPLACED

Warning: These photos are horrifying.

When I came across these images on the Facebook feed of local environmental activist Laura Hofman, depicting a couple playing fetch with their dog off the Newtown Creek Nature Center, I was shocked and naturally disgusted. My first reaction was – Animal Abuse! Call the ASPCA.   END_OF_DOCUMENT_TOKEN_TO_BE_REPLACED

Over a year ago, on September 27, 2010, the EPA opened a new chapter on the ongoing saga of our polluted waterway by designating the Newtown Creek a federally recognized Superfund Site. This program, which allocates federal money towards research and remediation and aggressively pursues polluters for subsequent remuneration, is contentious because it carries a powerful stigma; however, being on the Superfund list provides our neighborhood with powerful tools for improvement.

A year later, on October 25th, the EPA invited members of the public to an information session to educate locals on the upcoming plans for the creek.  At the meeting I was told to keep an eye on the website, where data and announcements will be made public.   Officials also informed me that studies into the physical geography of the waterway are set to begin next spring, including bathymetry to determine the exact geometry of the waterway and acoustic studies to find sunken obstructions, among others.

Following these will be chemical analyses to determine the exact nature of the contamination and identify areas that may still be leaching pollutants into the waterway.  Interestingly – perhaps suspiciously – these studies will be conducted by firms hired and paid for by the polluters themselves, though this will of course be under EPA scrutiny and direction.

Perhaps the most interesting information I learned was that this process involves coming up with a general cost for the pre-remediation studies – in this case, 25 million dollars for the studies alone, only 5 million short of what the entire remediation effort costs at the average Superfund site – and then leaving it up to the identified polluters to decide amongst themselves who is responsible for what portion of that cost and to fund the studies themselves.  The degree to which individual companies are held financially responsible is based in part on their contributions to the pollution and in part on their ability to pay; the EPA avoids bankrupting companies in pursuing remediation funding.

This is a long process, and we shouldn’t expect remediation to begin for at least 5-7 years.  I was told – hesitantly, and in no uncertain terms that this was only the widest of estimates – that the cost of remediation would be around 500 million at the absolute minimum.  Ours is what the EPA terms a regional “megasite” due to the nature, extent, and history of contamination.  It’s a dubious honor, to be sure.

This process will prove pivotal to the future of our neighborhood, so be sure to keep a close eye on the EPA website for updates and future public meetings.  If you have additional questions, contact these EPA representatives for more information:

There are two enormous spills beneath the northeastern-most pocket of Greenpoint: the Greenpoint Oil Spill, and the Meeker Avenue Plumes. Exxon Mobile has been working on the cleanup of the spill since 1991, with a seemingly endless patience.

The plumes are the accumulation of chlorinated solvents – tetrachloroethylene (PCE) and trichloroethylene (TCE) – which are used in dry-cleaning and cleaning metals. These solvents were spilled or dumped into the ground of Greenpoint for many years, the biggest historical offenders including Acme Architectural Products, Spic and Span Cleaners and Klink Cosmo Cleaners.

Last week the EPA released a report stating that TCE is a ‘carcinogen to humans.’ As explained by those who read more EPA literature than I, the big deal is that the last time the EPA said much of anything about TCE was in 1987, when they stated that TCE was a ‘probable’ carcinogen. In addition, it also is a ‘human noncancer health hazard.’ Double yikes.

Paul Anastas, of the EPA, promoted the findings as ‘an important first step, providing valuable information to the state, local and federal agencies responsible for the health of the American people.’

‘TCE’s movement from contaminated ground water and soil, into the indoor air of overlying buildings, is of serious concern,’ the EPA stated.

According to the EPA, there are 761 Superfund sites nationwide that are contaminated with TCE.

Many people in Greenpoint have had the NY State Department of Environmental Conservation (DEC) come by to install vents that trap and release these vapors into the outside air, instead of allowing them to move around inside a house. Many have not.

Dangerous vapors can intrude a home without being seen or smelled by residents. Greenpointers interested in having their homes tested for vapor intrustion can contact the DEC.

A vapor intrusion mitigation system, on the back of an apartment house on Kingland & Nassau.