Norman Avenue was not always called by its present name. It was once Third Street and then Union Street. Volckert Dircksen, the oldest son of Dirck Volckertszen, built his house near Bushwick Creek on Norman Avenue between Manhattan Avenue and Lorimer Street about 1700. The house is long gone, but near where it once stood is one of the prettiest houses in Greenpoint, 61 Norman Avenue, a cute wood- frame house set off the street with a gorgeous garden in its front yard. Before the street was created Norman Avenue was part of the beautiful Meserole Orchard, and the trees remind me of the ancient orchard. END_OF_DOCUMENT_TOKEN_TO_BE_REPLACED

Despite being so centrally located, Irene’s is somewhat of a mystery. Perhaps most Greenpointers are unfamiliar with the bar’s philosophy:”it’s happy hour all the time,” which I verified as TRUTH. Irene’s prices are actually equivalent to happy hour deals, all the time – we’re talking $2 drafts and dirt-cheap mixed drinks. I repeat: all day and night long. END_OF_DOCUMENT_TOKEN_TO_BE_REPLACED

Due to Hurricane Irene, Connie O’s postponed their end of summer BBQ to this weekend – same deal as last time, but better weather! So if you’re in town for the Labor Day weekend, head over to Cons on Saturday for $1 mugs of Coors & Coors Light and FREE burgers.

<a href=”http://thegreenpointers.com/app/uploads/2011/08/onyx1.jpg”><img src=”http://thegreenpointers.com/app/uploads/2011/08/onyx1-225×300.jpg” alt=”” width=”225″ height=”300″ /></a> The first time I entered the newly-managed Onyx on Morgan &amp; Nassau in Greenpoint, I heard one of the barkeeps refer to the neighborhood as Greenpoint Heights. I thought this rather fine, since the term North Brooklyn includes northern portions of Williamsburg, and we up here surrounded by Newtown Creek on two sides, the BQE to the south and the treacherous McGuinness Avenue to the west, we are in our own special paradise so many dozens of blocks from the trains. Out here where “Greenpoint” does not mean the Nassau &amp; Greenpoint stops on the G – or only by proxy. (Someone on Yelp referred to the area as Greenpoint SewTrePla – meaning the Newtown Creek Wastewater Treatment Plant, which moniker is less than wonderful.)

When we (me and my various roommates) moved to Greenpoint in 2004, we came from 156th Street in Washington Heights – and our neighborhood bar was on 80th. In Greenpoint we found a fine bar at the end of the block, at Nassau and Morgan avenues: Lyric Lounge. We patronized the place as often as our pockets allowed, but it closed within the year anyway. We were forced to Twisted, and after their demise, to Boulevard, an outpost of a watering hole beneath the crashing rushes of the BQE on Meeker Avenue.

When Lyric Lounge reopened, it was 2006, and it was called Onyx. Instead of rock and roll and some dart-boards, it was a techno-playing Polish-oriented club. And it was an appropriate place for such an establishment, really.

In early 2010 Onyx closed. In Spring 2011 it reopened under the same name (why?) but new management. Back came the rock n roll (whole albums, even) and a place to sit outside with a drink and smoke.

<a href=”http://thegreenpointers.com/app/uploads/2011/08/onyx2.jpg”><img src=”http://thegreenpointers.com/app/uploads/2011/08/onyx2-300×225.jpg” alt=”” width=”300″ height=”225″ /></a>The menu is surprisingly good – surprising I guess because of the ruggedness of the environs. (Boulevard’s menu, in contrast, is culled from a grill crammed into a corner in the back outside-area of the place.) Friends and I have tried Onyx’s grass-fed burgers, chicken sandwiches, mac n cheese, etc. Beers, wines, liquors. No complaints.

Given that the place is the only bar in the area (not including Connie O’s), that they have a backyard, that their happy hour includes $2 High Life, and that the burgers don’t make me feel funky, I will go here as often as they stay open.

And if we’re going to be particular enough to adopt a new handle, please, let’s go with Greenpoint Heights. Not Greenpoint SewTrePla. The mush of its pronunciation is horrible reason enough.

Local favorite Connie O’s Pub has just renovated its backyard and is opening it up to the public as a seated outdoor drinking area / bring-your-own-meat BBQ spot.

To celebrate the yard (and finally!) the arrival of warmer days, they’re having a big BBQ bash/cookout with free burgers, veggie burgers and hot dogs with $1 mugs of beer this Saturday.

The pub also boasts a number of all-day-every-day happy hour drink specials: $1.50 mugs of tap beer, upwards of $2 for bottled domestic beers and upwards of $4 for mixed drinks. There is also a $25 open bar special and $1 mugs of tap beer and free pool on Sundays and Mondays. 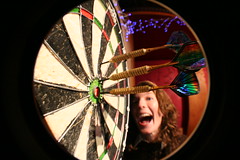 So you know I’ve been working on trying to get a dart league started in the nabe for some time and I’ve been lucky to find people who are working on putting it together. This is the last chance for bars to get involved before we start. Next week there will be a meeting at Connie O’s bar for bar managers/owners interested in setting up teams. For the details see my last post for the flyer. If you’re a bar and want to sponsor a dart team – let me know NOW!

If you’re an individual looking to be on a team when we start – email me and I will let you know what bars are looking for players as soon as I know. I’ll also post a list of bars that are involved and all the details as soon as everything is in place.

Now let’s poke an eye out!