The past few weeks have been very “hot town, summer in the city” and most of us have felt the overwhelming urge to blow off work to head to the beach. If you can’t play hooky during this week’s 90° days, we’ve got at least another month and a half of chances for good beach weather. The issue is getting to there from North Brooklyn is no easy feat. But luckily, it is getting easier as the years go on. Well, at least, the city is trying to make it easier. Here’s are the best ways to get to our area beaches without a car. END_OF_DOCUMENT_TOKEN_TO_BE_REPLACED

This past Saturday, June 21st, New Yorkers had a chance to grow back their tails, don their eye patches, and be part of that worlddd at the Coney Island Mermaid Parade. Mayor Bill de Blasio was there, maybe you were there, and Greenpointers was definitely there…getting the full scoop. END_OF_DOCUMENT_TOKEN_TO_BE_REPLACED

5 Cheap Things To Do In & Around Greenpoint Before (GASP!) Summer Ends 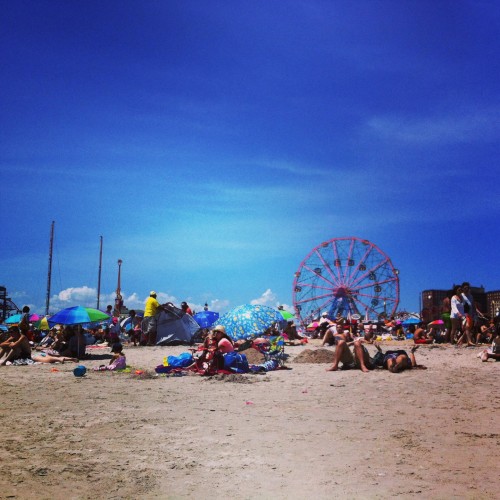 Dudes! The Fourth of July has passed. August is fast approaching. Sure, this constant humidity and 90 degree heat sucks and begs us to stay indoors in front of the AC racking up the electric bill, but we cannot let Mother Nature win!

Autumn’s cool breeze will be blowing leaves in our faces before we know it. We’ve got to take charge and make the most out of the last of our summer weeks. Here are a few inexpensive suggestions to help you end these hot, sunny days with a BANG.

I dare you! It’s not as far as you think. Well, it is, but it’s a pretty flat, easy route and once you arrive you can eat a hot dog at Nathan’s, jump in the ocean depending on how hardcore you are, and then brag to your friends that you biked 26+ miles. Once you get past Prospect Park, you’re on the Ocean Parkway Greenway for a little more than 4 miles. This bike path is mostly shaded and separate from the street so it’s safe and for the most part a pretty sweet ride. If you’re one of those New Yorkers who’s never been to the historic amusement park, I highly recommend it. Heck, I demand it. It’s equal parts awe-inspiring and gross, but will dazzle you nonetheless. Also, you’ve got to ride the Cyclone at least once in your life.

If there is one place in the world to save during the apocalypse it’s Coney Island, Brooklyn. I know it’s corny to say, but it’s so real. Real New York. Real Brooklyn. Real characters. Real hot dogs! It’s where my father taught me how to take pictures, where I learned to muster the guts to walk right up to anyone, no matter how crazy they look, and ask for a portrait. Plus the Cyclone is there!

I wrote an article and photo essay of my adventures with a Coney Island artist named Africasso during Go Brooklyn for Hyperallergic, which is an outstanding Brooklyn based art blog.

I also made this quick video to share with Greenpointers readers and dedicated it to my dad. Enjoy!

It’s January and freezing but that doesn’t mean you should shut yourself in. There are still a lot of fun things to do around Greenpoint and nearby.

* Starred items mean: “See you there!”

THURSDAY 1/5
• Funky @ The Warsaw (261 Driggs) 9pm-1am, All Vinyl
• All the Single Ladies: Anna David, Beth Griffenhagen, and Rachel Kramer Bussell @ Word (126 Franklin) 7pm, Anna David’s new book recounts how she found herself in her mid-30s with 2 cats, one toolset she didn’t know how to use, and zero romantic prospects on the horizon. Also, Beth Griffenhagen (Haiku for the Single Girl) and Rachel Kramer Bussell (Women in Lust, Best Sex Writing 2012). Reading includes a haiku contest, prizes, and refreshments!

MONDAY 1/9
• OCD Lecture Series: Notes from Jupiter: Decoding the Toynbee Tiles w/Justin Duerr @ Pete’s Candy Store (709 Lorimer) Free, 7:30pm, “TOYNBEE IDEA in Kubrick’s 2001. RESURRECT DEAD ON PLANET JUPITER.” With these words unfurled an urban mystery whose clues have confounded the most stalwart seekers of its arcane meaning. They are the Toynbee Tiles, strange messages embedded in city streets throughout the United States and South America that have been puzzling passersby since the 1980s. Join Justin Duerr, who has been investigating these tiles for over two decades.

WEDNESDAY 1/11
* Friends of McGolrick Park Meeting @ Lutheran Church of the Messiah (129 Russell) 7-8pm, will discuss the recent meeting Friends of M. had with all of the officials that preside over the park and talk more about how to spend the $2,500 we raised (and have received!) from Exxon-Mobil, RSVP *

I read the latest Time Out this morning during my commute and spied an article on the “bloggiest” (their word, not mine) nabe in Brooklyn. Turns out it’s Clinton Hill with CHB being at the head of the class. Hey, I read it and I don’t even really know exactly where Clinton Hill is.

But what I have to mention the super weird article that was underneath that one just because it was the most bizarro thing I’d heard in awhile (of course until I checked out the next page with the Public Eye feature of Lloyd Koulen the Nazi-supporting black man, but I digress).

The little “It happened here” blurb talks about Lilliputia in Coney Island which apparently was “an experimental community of little people” that was part of Dreamland in the early 1900’s. And at first it sounded quite darling.

Their city, in a area 80 x 175 feet, was built at half scale as a replica 15th century Nuremburg, Germany. Everything was built in proportional scale of the inhabitants, from the theater to the beach lifeguard towers and toilets in their homes. The midgets had their own parliament, their own Midget City Fire Department that responded hourly to a false alarm, and their own beach complete with midget lifeguards. There was also a “Midget Theater”, circus arena, miniature livery stable with diminutive horses, bantam chickens, and midget Chinese laundrymen. To accentuate the “little people’s size, a giant or two sometimes walked the area. During the park’s off hours, the “little people” lead a typical mundane family life. From Jeffrey Stanton

You can even read about Queen Mab & Caspar Weis known as “the most famous midget couple in the world” and one time residents of the Coney Island Midget Village.

Charming, no? Until of course reading it was turned into a “hotbed of sexual anarchy” and “all kinds of promiscuity, homosexuality and nymphomania was encouraged”. Um, do you think Thor would be interested in recreating that with their new vision of Coney Island?

Human beings from every part of the globe were brought to Dreamland and put on display. The park manager, Sam Gumpertz, acquired a dozen Somali warriors from French Equatorial Africa and an entire village of Eskimos. In 1905, he hustled 51 tribesmen from the Philippines past startled immigration officials. Gumpertz himself recruited all the citizens of Lilliputia, a half-scale European village which served as year-round home to 300 midgets. At Creation, visitors journeyed backward through 60 centuries of biblical history to the Divine Origin of all things. Next door, vast panoramic exhibits foreshadowed the End of the World and Hell. From Scenes of My Hometown

Hellgate, a boat ride through the caverns of hell, was the start of the Dreamland fire

How freaking cool was this place? With “vast panoramic exhibits foreshadowed the End of the World and Hell”, an “entire village of Eskimos” and even “a display of baby incubators, where premature babies were cared for and exhibited“? Sigmund Freud, supposedly declared Coney Island the only part of America that interested him – and we know what a sick freak he was.

I have now spent pretty much my entire work day reading about Lilliputia and I am officially adding Dreamland (P.S.) 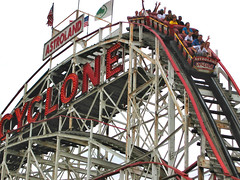 Ah, busy weekend. After my bout with sickness, entertaining my little sister for the weekend and that whole not having internet at home thing I didn’t get around to blogging. And GG is just lazy.

I took the little sister to Coney Island to ride the Cyclone on Saturday. It was awesome. All I’ve been hearing is about how Coney Island is going away and blah, blah, blah so I figured I’d check it out again since I hadn’t been there in oh, about, twenty years.

I used to go there with my girlfriend when we were kids. Not even supposed to be on the train, but we could get away with being gone for more than a few hours on Summer days, the closest place to go of any real fun was Coney Island. I even swam there when I was a kid. As if it was a clean beach.

We got off the train and my first realization was it was so much smaller than I remembered. But the Cyclone was bigger. And the area? Still left something to be desired. In a weird way it was comforting that it was still a little trashy. Everything in New York has become so fucking candy coated and white bread that it makes me want to vomit sometimes. Times Square and the Meatpacking District are the most obvious examples but it’s happening everywhere.

When I was a kid Williamsburg was considered a bad neighborhood. We didn’t even really call it that, it was the North Side and the South Side. With the South Side being a hooker and heroin haven. I was even friends with a girl whose mother was a real live prostitute and drug addict! On early weekend mornings when me and the fam went driving towards the Williamsburg Bridge for a visit to the city, we’d point her out clearly doing the walk of shame back to Greenpoint after a rough night.

But now almost all, if not all of Williamsburg is practically G-rated. I mean how afraid can you really be of strung out white boys who weigh about a buck ten from Kansas? Not very.

I know things are only going to get worse (read: better). You can see it trying to happen in Greenpoint. The Puerto Ricans from the other side of Greenpoint Ave are getting priced out but the the Polish community has a stronghold on the area. As much as people might like to think that eventually the Poles are going somewhere else, they’re not. The Poles own their buildings and businesses. And they’re quicker to rent and/or sell to their own. In my opinion, Greenpoint will never be completely gentrified like Williamsburg.

And I’m happy about that.