Op-Ed: What We Can Learn From Greenpoint’s Low Voter Turnout

I recently had my first experience as a poll worker right here at the Greenpoint McGuinness Senior Center polling site (715 Leonard St). There was a lot that I enjoyed, and I encourage others to be a poll-worker some day. It is democracy in action.

Unfortunately, my patriotic glow dimmed the next day, when I woke to discover our district had posted some of the worst voter turnout in the city, 18.8%. Having grown up in California where 40% voter turnout is considered low, I began to wonder why New York’s turnout is even lower. END_OF_DOCUMENT_TOKEN_TO_BE_REPLACED 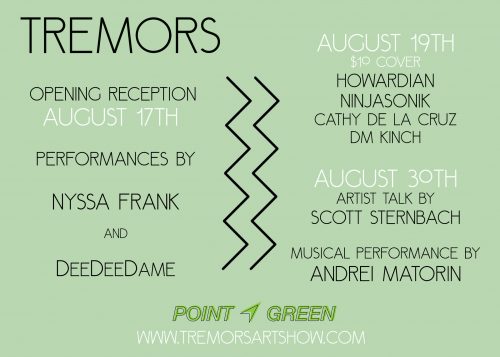 New(ish) art gallery Point Green (260 Java Street) is hosting a multidisciplinary group art show opening tonight (8/17), called TREMORS, in response to recent political and social upheaval, with a portion of proceeds going to charities nominated by the artists (including the ACLU and Planned Parenthood among others). Tonight’s opening (6-9pm) will include performances by Nyssa Frank and DeDeeDame. On Saturday from 7-11pm they’ll host a night of music and dance, with performances by Ninjasonik, Howardian, Jocko Weyland, Cathy de la Cruz, and DM Kinch. Scott Sternbach and violinist Andrei Matorin will host an artist talk & performance on August 30th from 6 – 10 PM.
END_OF_DOCUMENT_TOKEN_TO_BE_REPLACED

To paraphrase American anthropologist Margaret Mead, never underestimate the power of a few thoughtful, committed citizens to change the world.

This post was originally inspired by my excitement for a cool culinary collaboration taking place in the community tomorrow night. Then I learned from Joint Venture that all proceeds from the event would be donated to the American Civil Liberties Union (ACLU), designated especially for the defense of immigrant rights, and my excitement turned to heartened pride.

Like a good meal shared with good company—as Tuesday’s event looks to be—philanthropy warms my heart. Quite simply, its very meaning is rooted in the “love of mankind.” On Tuesday night, Providence, Rhode Island restaurant North and food and cultural project Joint Venture will team up with Greenpoint’s own Alameda (195 Franklin Street) to share a meal that by design celebrates working together and embodies the spirit of philanthropy. The event, which will be held at Alameda from 6-11pm, is led by North’s James Mark (formerly of David Chang’s Michelin-starred Momofuku Ko), Alameda’s Nick Padilla (previously at world renowned Momofuku Ssam Bar) and Joint Venture’s Danny Newberg (also formerly of Momofuku Ko, and most recently Estela), who have remained friends over the years despite their divergent paths since their time in the Momofuku kitchens. The seafood and vegetable-focused à la carte menu will feature yellow tail fluke crudo, grilled squid with crispy rice, whole black bass with ginger scallion sauce, and a fried salt fish sandwich. All fish is being brought directly from Rhode Island by Mark, and vegetarian and vegan options will also be available. No reservations will be taken for the event, so walk on in!

No stranger to collaborative endeavors in his role as head and founder of Joint Venture, Newberg emphasized the importance of the charitable component of this particular event. He notes the excitement about the three of them cooking together again being dampened by the events of the last couple weeks. As Mark described, “they have us a little shook.” But rather than cancel the dinner, the trio is determined to leverage the occasion for a broader impact. In a recent Instagram post promoting the event, Mark affirmed, “This country gave my family a chance a generation ago. I’m sure as hell going to do what I can to protect the next one.”

Indeed, these times call for camaraderie and community action. Please join me, Alameda, North, and Joint Venture for a coming together of friends new and old over delicious food and drink in support of the ACLU and love of mankind.

We got the chance to ask Emily Winter (co-founder), a few questions about the festival and discuss why good comedy is no joke. END_OF_DOCUMENT_TOKEN_TO_BE_REPLACED