The recent spike in crime got us thinking– how safe is Greenpoint, statistically? Has crime increased over the past year? Between last week’s home invasions/sexual assautls, pistol whipping, and a poll that ranked Greenpoint “just below East New York for perceptions of class and safety,” we wanted some insight on the wider trends in crime.

Contributor, Cristina Vásquez Obando, created this helpful infographic, which lays out the data, according to the NYPD Crime Stats.  Included, are the numbers from 1993, for some historical perspective.

The good news? Robbery is down by 22%. And, best of all,  look at how much safer the neighborhood is now than it was 20 years ago. In 1993 Greenpoint, the chances of being robbed, burglarized, and assaulted were significantly higher. 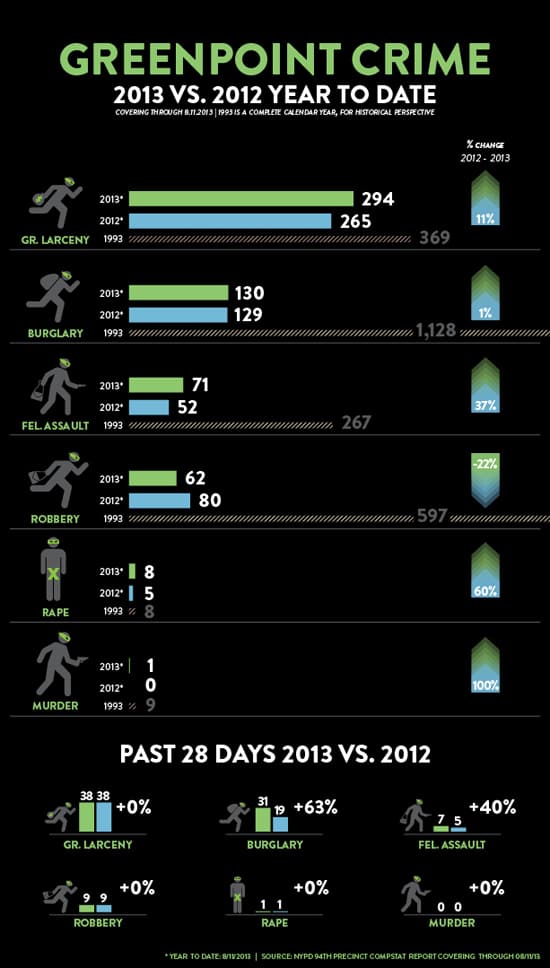 Grand larceny in New York, refers to stealing amounts of $1,000 or more. Burglary involves breaking and entering of a dwelling with an intent to commit a felony. Robbery is defined by the law as taking or trying to take something from someone that has value by utilizing intimidation, force or threat. In order for robbery to take place, a victim must be present at the scene.

Stay safe out there!

Originally from Puerto Rico, living and raising her family in Greenpoint since 1978, Mrs. Garcia, by far one of my favorite Greenpointers, holds down Kingsland Ave. She invited us into her apartment on New Year’s Eve, shared with us her amazing yellow rice and chicken and showed us photos of her 11 grandchildren.