The many doors to Ainslie are now open!

We’ll start with this: Ainslie is enormous. Sprawling and industrial, it’s almost like its own campus, packed with large open patios and tucked-away crannies, and (for those who enjoy people watching), a catwalk above the main bar to peruse the crowd. Oh, and there’s a rooftop.

But despite how large the 10,000-square-foot restaurant, there’s an intimacy to the space (props to the kind and knowledgable staff) and a warmth to its interior (thanks to the wood-burning oven), all of which contributes to a full stomach and fantastic night out. 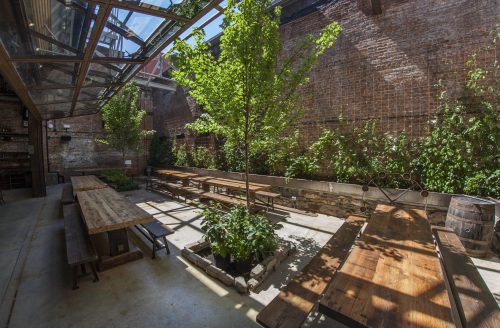 Named for the street it dominates, Ainslie is part wine bar, part Biergarten, part perfect-date spot for apps and handsomely priced happy hour treats. On a weeknight, you’ll see couples and even some kids enjoying the Italian fare of the menu (spoiler: everything looks and is appetizing), but I’d imagine the weekends bring in a more dynamic, fresher crowd. And that’s part of Ainsliee’s appeal — it is amorphous without losing definition; the space can be whatever you want it to be. (Birthday parties will surely be a hit here.) Gorgeously designed by Sergio and Mario Riva as well as AJ Bontempo, Ainslie is housed in an excavated old factory, features exposed beams and bricks, and sits in one of the most desirably locations of northern Brooklyn: right where the G and L trains meet. Commuters will have a hard time not swinging by on their ways home from the Lorimer or Metropolitan stations; the very many doors and windows of the building’s rustic facade stay open as the humming noise within spills out onto the streets, inviting. 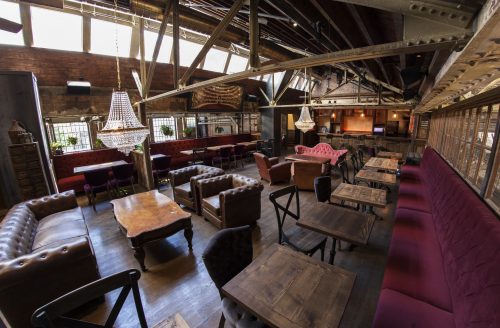 Chefs John DeLucie and Erasmo ‘Mino’ Lassandro crafted a menu featuring homemade pastas and wood-fired pizzas, but other dishes are just as saucy, including the mascarpone and thyme-infused honey bruschetta (a must for starters, though you might want to order two) and the rosemary wings (with gorgonzola dulce dipping sauce). Vegetarians and pescatarians will find lots to play with on this menu.

As will anyone looking for a chance to explore this cavernous space, which resembles a playground for Brooklynites, and with so many nooks to explore, it begs to be revisited. 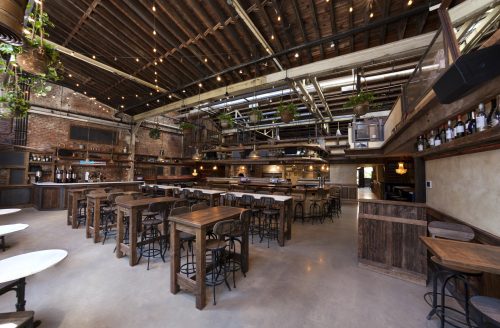