Perhaps you just heard of The Animators by Kayla Rae Whitaker – either randomly browsing the shelves at Word Bookstore (126 Franklin St.) or you stopped by the author’s reading at the cozy shop. What happens when you meet your best friend at university? Meet Mel and Sharon in The Animators, two women who forge a kinship and friendship in art school and endure the trials and tribulations of living and working in Brooklyn while making a path for themselves as animators. They’re on the brink of success with their first full-length feature film while living in a fragile world full of urgency, love, sex, and drugs. 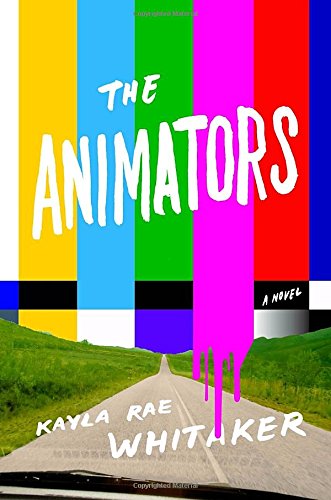 “We sank into a cozy little vacuum, Mel and I, watching. I don’t know if it was the cartoons themselves, or watching them with Mel, but that night was the closest I had felt to knowing what I wanted from my life. She was the first person to see me as I had always wanted to be seen. It was enough to indebt me to her forever.” – The Animators

The Animators by Kayla Rae Whitaker takes a visceral turn when both women must confront their unique partnership’s tragic pasts and insecurities that they’ve both long buried. When Mel’s mother dies, the women go on a trip to Kentucky to settle Mel’s past and the story flows into a sea in which the women confront waves of emotions: pain, love, anger, longing, and empathy.

This is a story about survival. With Whitaker’s smooth prose, the narrative thread unfolds and we learn more about our characters, Mel and Sharon. Both of these women have struggled to survive and their personalities are shaped by these formative but traumatic experiences. Mel is brazen, brash, and unapologetically outspoken. Whereas Sharon is observant, closed, and shy.

“How silly it is to assume that what we’re dealing with is not something that will, in turn, deal with us.” – The Animators

What is compelling about these two women and their journey to confront their pasts and inner selves is that they are flawed (and fascinating) characters. They have problems. They experience setbacks. Mel drinks and smokes and has penchants for binging on her vices. Sharon retreats and micromanages. These are realistic touches that bring the characters into a new reality. Whitaker doesn’t shy away from putting her characters into an unbecoming light because real life isn’t always pretty or glossy.

This story is with its plot turns, realistic life touches, and developed characters. Whitaker isn’t afraid to touch on taboo, dark, and unsettling topics. Therefore, the narrative spins and weaves itself into a suspenseful spell, with an enchanting bond between two women. The book thrives on its basis: friendship and how its bond stand the test of times in tragedy, love, and peace.

The Animators is available at Word Bookstore (126 Franklin Street).

Stephanie is a poet & pathological daydreamer. Her books Hotel Ghost and Waiting For the End of the World are available from Bottlecap Press.
View all posts by Stephanie →