Newly elected Prime Minister of Canada, Justin Trudeau, made it into the Greenpointer Hall of Fame yesterday (by our measure).

We shipped him a Key to the City that operates any elevator here, so he can enjoy a spliffy from the rooftop view of any tall building around town.

But what did he do to earn it?

His completely ratchet tattoo alone (see below) got him in. And, he’s not a tool. Except for when he met his future wife.

He got her number, and then didn’t call her. Typical (or at least typical 20 yr old Greenpoint guy) false explanation: “When I met her I knew I’d no longer be single again.”

Here’s the rare happy ending. He meant it. Ran into her accidentally-on-purpose a year later. So now they’ve got kids wrestling around the ottoman, 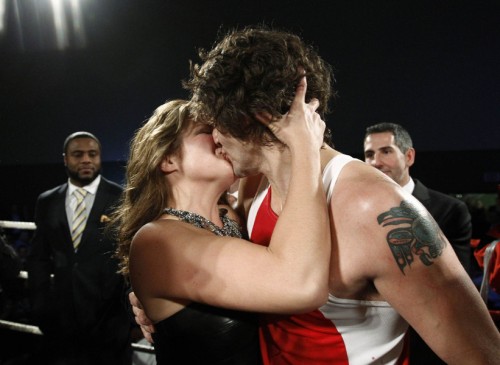 Canadians have enough to deal with from the U.S..

So here’s a journey to the Canadian Atlantic Provinces with Great Big Sea and Stan Rogers and others like-minded. Here‘s where Sunday you can find the same. Hope to see you there.