Julie Lerner is the energetic and cheerful Founder of EatDrinkJobs who, along with her co-founder Jason Miller, launched their venture the Fall of 2012.  With her background working years for the New York State Restaurant Association, Julie knows the NY restaurant industry well, and knows its pitfalls.  Julie talks about solving the pain point of connecting great restaurants with stellar applicants, beating the Craigslist system of finding jobs, and getting cappuccino at Five Leaves.

Julie: I’m Julie Lerner. I’m the Founder of EatDrinkJobs. We launched in February of last year and I have come from the restaurant industry; worked with the New York State Restaurant Association for many years. And I actually had wanted to put a job board on the Association. It made sense, working with all these restaurants.

People are always looking for talent. And I started talking to restaurants and bars. And they said, We don’t need another job board. We need to get qualified candidates.

So I started exploring more and what everyone uses is Craigslist. 95% of probably all hospitality jobs come from Craigslist. And it’s just kind of from inertia. Just what from what people started using, so both sides come to it: the five-star restaurant down to the local diner. 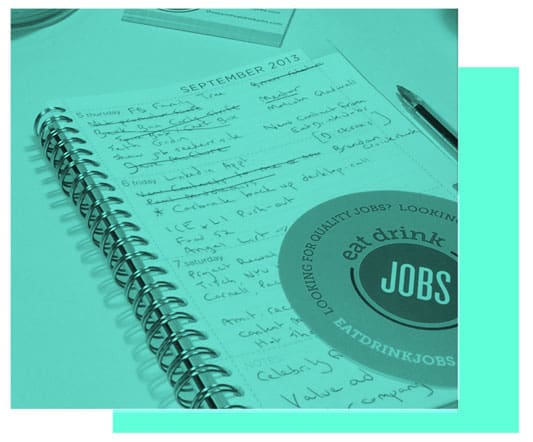 So that’s where the jobs are. That’s where all the job-seekers come to. It’s why you get a lot of volume. It’s great for volume. [But] it’s kind of very inefficient, because you’ll place a job on a server, and you’ll get 300 resumes. And say only, 10, 15, 20 are viable. So you have to kind of clear it. And it takes a lot of time. So we thought, hmmm, it’s a big marketplace. And there’s an incredible amount of turnover, like 75% turnover on average between the quick-service restaurants and the full-service restaurants. So there’s always a need for talent.

So we thought that this would be an opportunity. So we looked into Angie’s List and so forth. We wanted to have them create a profile and attach a reference right there. So the goal was someone that was a vetted.

Erin: Was this while you were working for the New York…?

Julie: No, not at the Association. What we found was that we were getting a more motivated candidate, like someone who would go to get a recommendation but not necessarily a more qualified candidate. And were  limiting the field because a lot of people didn’t want to do that. So you create a hypothesis. You create a clean site with a profile – people will come. If you require a recommendation it’s a series of testing. So after six months we realized we weren’t getting the volume and we weren’t necessarily getting the better, qualified candidates. I mean still people can use it to get a reference. It’s very clean. It goes out to the referral and they can attach it to their profile. 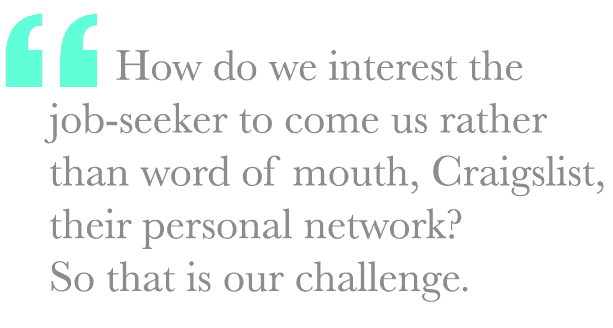 Erin: Who is we? Who are you working with?

Julie: With Jason Miller. He’s my partner and he’s kind of in Operations and works with a lot of customer service,  works with the tech team and any kind of development idea that we are doing. And then we work with a company called Gourmet Marketing, which handles our social media and our blog. And then we have a tech developer. So we are a very small ship.

And we are still…it’s always hard to launch a business. And we actually got a lot of push back. You can’t go up against Craigslist. And we were thinking, well, AirBnB and Seamless and there are a lot of companies that have definitely taken a bite out of Craigslist. And as a small company, it is tricky. So that’s kind of our biggest challenge. So after that we put in filters and so if they get like 50 resumes, they can filter years of experience, availability, all these different filters.

We just need more volume and this is kind of where we are at this point. How do we interest the job-seeker to come us rather than word of mouth, Craigslist, their personal network? So that is our challenge.

Erin: What was it like in the early stages and how did you find a space to work?

Julie: We actually looked at a bunch of co-working spaces and we really loved this space at The Yard. We really like being over in Brooklyn. There’s a different energy. Obviously it’s very young with a lot of start ups. Our population – we’re trying to reach are younger.  The hospitality job seekers [range] from 18-35, so it’s really kind of helpful to be in this kind of atmosphere to kind of interact with them and brainstorm with them.

Erin: You live in the city, right?

Julie: I do, I live in the West Village.  I drive. I’ve worked for 20 years in the city. I’m a big fan of the subway but it’s kind of nice just to having that different commuting experience (driving).

Erin: How do you see your business growing?

Julie: We really need two things together: creating partnerships and we’re looking for an alliance where we can be a value at. We’ve been talking to a number of people who are kind of sorting that out,  whether they are jobs in restaurants or they can be another kind of value at. So that’s one way to go. And we’re trying to get creative about what can we do to draw job-seekers. That’s a little outside the box and that’s what I’m working on a lot.

Erin: How different would it have been if you were working in Manhattan versus in the co-working space you’re at now in Brooklyn?

Julie: It’s a completely different perspective. So much of the exciting restaurant scene is in Brooklyn and it’s just up and coming. And it’s much more neighborhood-y … we also work with a lot of the iconic restaurants in Manhattan. I think it helps with the creativity, quite honestly. Because you’re in the city, it’s like very fast-paced and this is a little more relaxed, which I think helps with the creativity.

Erin: And do you have any favorite restaurants around the neighborhood?

Julie: Yeah. I feel like I’m on maybe a movie set. Maybe there’s it’s just very charming. It’s just a great space. They should film in there. I mean there’s just so many restaurants and it’s completely different than Manhattan. It really is.

Erin: Last question. Is there anything that I haven’t asked you that you’d like to talk about?

Erin: My favorite restaurant…I’m a big fan of Five Leaves (oh yeah!) right off of Nassau Avenue. You’re right near there.

Julie: He is great. The cappuccino guy there is adorable. Have you ever gotten a cappuccino from the window?

Julie: Oh yeah. Go get a cappuccino from the window. He’s just like too way cool for me but he’s just very handsome and he makes an awesome cappuccino.

Erin: Alright, I’ll be sure to make a visit! (laughing). Alright thanks so much Julie. That was great.