On a Sunday morning, I met with  Sam Jones and Ben Bernstein of Glass Embassy at Cafe Grumpy to talk about going from video production to web design to video games (in the future) and disregarding conventions a little too much.

Meet the two friends behind Glass Embassy: Sam Jones and Ben Bernstein.  Ben is the Founder and President of Glass Embassy, and occupies several roles: creative director, producer, composer, and editor.  Sam is the Vice President and director and cinematographer for the company.  His expertise is chiefly in video and film production.

Erin: What kind of work does Glass Embassy do?

Sam Jones: We’re interesting in that regard.  We call ourselves a media arts production company but in some ways we function like an agency.  We take on a lot of different projects and then sometimes Ben or I head them up. Sometimes we bring on a whole bunch of collaborators and freelancers such as Weird Days and Spaceman Sound. We started out doing video, a lot of little doc pieces and promotional videos.  We do a lot of video content but we also do branding and design websites.  We really like to try new things as a business. We have ambitions of branching out beyond just web and video into other modes of creative production.

Ben Bernstein:  Being in NYC, with the confluence of technology and culture, is really attractive to us.  I think it’s a really fun blurry line because our art, from the purely cultural artistic side, is informed by the technology. New technology factors into it.  And the other side of that, the technology we’re interested in is pushed forward by the creative ideas we get, that our friends get. We’re interested in exploring new media from both the tech point of view and artistic point of view.  I’m noticing it’s the driving force in our work. 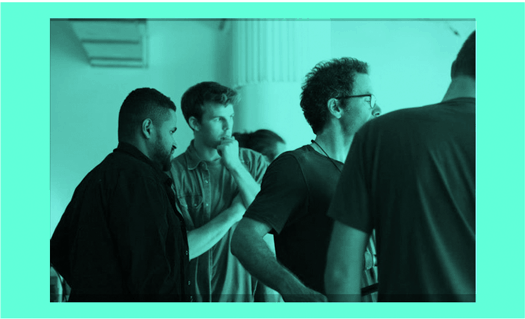 Erin: Can you name any current or previous client projects you’ve worked on and the technologies you’ve used?

Ben: We’ve worked for a bunch of tech companies here.  Doing mostly video stuff.  We’ve worked for Lua, we’ve worked for Songza.  A lot of  ‘-a’ companies. We just finished a redesign as part of an MTV artist website.  We just shot a piece for GQ, Conde Nast, featuring Danny Brown, the pilot for an original series we’re pitching to them.

Sam: We’ve done a number of web projects and video projects but we haven’t done a lot that really integrates the two, something we’re capable of.  We’ve been in talks with some people about designing a whole website and doing branding for them and then also doing a lot of content that’s in there.  I think it’s something that makes a lot of sense.  How you brand your online presence is so important now.  A lot of people split up those tasks among a lot different people or agencies and we think we’d be really good at creating a unified front for our clients.

Erin: Are there any current brands or agencies out there doing a good job of that?

Ben: I guess, my kind of cocky answer is … no [laughter]. There are great production companies here like mssngpeces, there are agencies, Magma is one we look to for how they branded themselves. But I haven’t seen a company that focuses on production that fulfills all of a client’s needs, branding needs.  I think that’s what’s needed today.  I think people want good stuff.  I think the production, the artistic creation aspect is just key to telling any story, to selling any product. 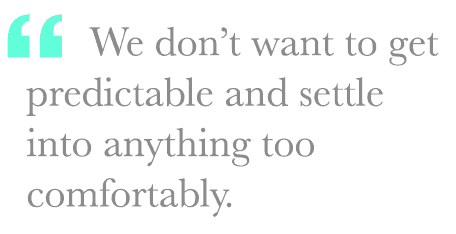 Sam: It’s true.  I think if you look at the traditional agency model, you’ll have your agency people come up with the concept, then the creative.  Then often you hire out the work, the implementation to someone else.  We’re unique in that we come up with the ideas, do all the creative and then we produce it and do it ourselves.  You’re risking a lot less in terms of what things are getting lost in translation.

Erin: And going back to how you started this, did you start in Greenpoint?

Ben: You have to go back a little ways.  Sam and I went to college together.  We went to Wesleyan University.  We were friendly but we didn’t work together.  We spent years in the city.  Sam working pretty much exclusively in film, learning the ins and outs of production.  I worked in production too but also worked in a conceptual design agency.  I worked for a music producer and I managed a technology center. I had a whole array of media experience.

About two years ago I don’t know what it was but something kind of hit me. I had all these friends and collaborators and we’re doing all these great things but we’re all working for different people. And it doesn’t seem necessary to me.  About two years ago I started Glass Embassy, spent time trying to figure out how to get it off the ground.  And about a year ago Sam and I started working together.  Sam shot a music video I directed.  And we just clicked at that moment.  We realized we work well together, we have similar goals, we see eye to eye about not just work ethic, but also seeing the forest for the trees of great ideas.  And it’s been great. I think we had a great, crazy run so far.

Erin: How did you come up with the name the Glass Embassy?

Sam: You’re representing something you believe in, that you work for, but you’re out taking a risk.

Ben: You have home base where you report to somewhere else. But ultimately it’s a little bit of an expedition, an adventure which is how I feel we work.

And glass is an interesting material.  It’s been around, it’s made of sand.

It’s transparent which is important to us.

Erin: How is it working in Greenpoint?

Sam:  A lot of the web stuff we do, you can do it anywhere and so we just do it where we live. It just makes sense.  A lot of our collaborators live in the area as well.  But for the physical film production aspect of things, increasingly, so much is shooting in Brooklyn.  There’s so much going on in the Navy Yard, shooting in Greenpoint, there are studios here, studios in Bushwick.  Honestly, it’s just a better place to be from a production’s point of view than Manhattan.  We load up our gear and drive down the block.  So much shooting is happening here that we often don’t have a reason to even go to Manhattan for a job.

Erin: How’s the community here, working with your collaborators?

Sam: Pretty much everyone we work with and collaborate with on a serous level live in Brooklyn.  There is a communal vibe. We do projects for bigger clients that are intense and demanding with serious budgets.  We still do some things as Glass Embassy that we believe in that aren’t as well funded.  We’re more than just a production company.   We have collaborators who hire and we have collaborators who help us with our labor of love projects for free. I think that’s our strongest asset.  We have a really good network of really talented young creatives – we know sound mixers, colorists, great cinematographers.  They work hard for us because they’re friends.

Ben:  And geographically, they are more concentrated in Williamsburg and in Greenpoint.  A lot of people we work who have that attitude are in this area.  There’s a good vibe overall.

Erin: What question have I not asked yet that you’d like to answer?

Ben: The young and experienced angle is something that appeals to us because we’re often bidding against companies with producers 20 or 30 years older than us.  I do think that something that makes us special is the young and experienced attitude. Yeah we’re in our twenties, we’re not seasoned old salty producers who have been around the world doing this for years and years and years but I believe our work ethic coupled with our openness really makes us worth hiring.  The people we work with appreciate that and they believe in it.  I think that’s the angle you’ll see in the digital age more and more around.

It’s a disruptive thing because it turns things upside down that we can figure it out by hiring the right people or learning to do some things ourselves.  We love doing things we don’t know how to do.  That’s what drives us forward.  Yeah we haven’t done this exact thing before but you should still trust us to figure it out.  We can do it.  And we’ll do it in a fresh way, in a way that makes it cool and interesting and worth paying attention to.  We’ll tell that story in a really special weird new way because it’s the first time we’ve done it!  We’ve had success with that and I’m excited to see Glass Embassy embrace that more.  It’s good to do things that are unknown.

Erin: What’s an example of that?

Ben: We’re interested in making a video game.  One of our interns this summer reminded us of this idea, “You know you guys make film, you do art direction, you write, you do all these storytelling components.”  A video game is a frontier of that.   Video games that are true works of beautiful, contemplative art.  We haven’t started production on any of it, we’re just thinking about it. But I think it makes sense as something that’s feasible, that we can design as a product, that we can get investment to do.  It’s not like a hobby, it could potentially be the focus of the company.  We disregard the conventions a little bit, sometimes a little bit too much.  But I’ll take disregarding them too much rather than too little in terms of where we might want to focus our energies on.

Sam:  Sometimes a client will ask us to pitch for a project and we’ll throw out pitches and oftentimes they’re first like “Wooahh, this is too much, this is too crazy.  Tone it back.”  We’re always looking to push in that way, to throw curveballs. The notion of  a film production company taking on a video game, most companies wouldn’t take that on.  We’re actively trying to push ourselves. We don’t want to get predictable and settle into anything too comfortably.

Ben:  We never pitch to a client we didn’t think was cool, ever.

Ben: We keep the Brooklyn Standard in business.

Sam:  Shouts out to Grumpy.  I really like their coffee a lot.

Ben:  We really like Jewel Box too.  Well, it’s actually called Jewel’s Cafe but we call it Jewel Box.

Thanks to Sam and Ben!

Check out their website for a portfolio of their work.