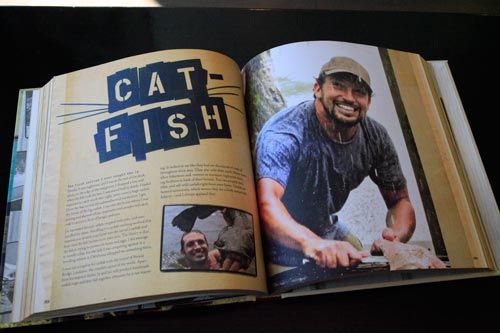 Yesterday I received a group facebook message from Greenpointer Ben Sargent thanking everyone in his life who has worked with him “on some crazy idea related to food, fish, fishing or the ocean! Even if it’s “sharing” a wave or a sketchy spot at the end of a pier or jetty along the East River or in MV, Truro or Orleans…I just want to say thanks!”

Tonight (7/30/13) from 7-9pm is his Cookbook Launch at Powerhouse Arena of “The Catch,” and he said that “this book was inspired by all those moments!!!”

Grab a book, get it signed and stay for a “moment” a fish boil out of his little red lobster mobile, which you can see daily parked on Lorimer St in Greenpoint. The after party will be at Bait and Tackle in Red Hook. 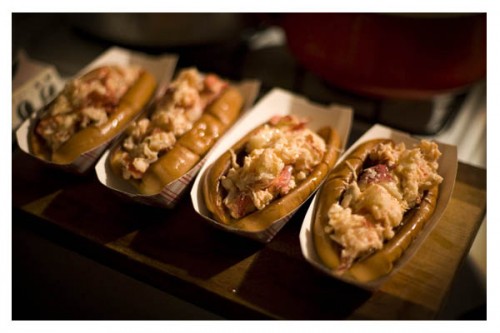 Obviously I wanted to do a write-up so I wrote back with my number and asked him to give me a shout because I couldn’t find his contact info. Shortly after I received a call from what I had entered into my address book many years and iphones ago as “Dr. Klaw.”

A few years ago I met Ben and did a write up on my old food blog about his Underground Lobster Pound which he was running out of his Greenpoint basement apartment that resembled the underbelly of a pirate ship. It was the best lobster roll I’d ever had and until the operation was shut down, he was delivering lobster rolls in his tricked out truck and would roll up with a huge ass gold lobster claw hanging around his neck. His “crack rolls” went international with this hilarious German video that chronicled his illegal lobster roll dealing.

This is just one of many of Ben’s adventures that inspired his book The Catch.

Ben grew up in Cambridge, MA, and was influenced early on by his “outdoorsy dad” and Grandpa who taught him the importance of catching and hunting his own food. The family also ran a Duck Hunting Camp and Tackle Shop on Martha’s Vineyard. After studying art and enjoying fly fishing at Skidmore College in upstate NY, Ben came to NYC with the idea of making a living as a traditional sculptor, but soon realized that “it’s hard to make a living that way.”

In 2001 he opened Hurricane Hopeful, a tiny little chowder shack on No. 7th in Williamsburg, which was described in this 2002 Free Williamsburg article as a “soup bar, shaved ice stand, and brainstorm (or evolving idea he might say) of Benjamin Sargent.” In the article Ben was quoted as saying, “‘It’s a fun idea, and while it seems a bit far-fetched to have a surf-inspired shop in New York City, it’s not preposterous.'”

Preposterous? Ben was clearly ahead of his time. The “surf movement” in Brooklyn and the Rockaways is in full swing now with surf shops like Pilgrim, the NY surf blog NYC Urchin, school bus rides out to Rockaway with Rockabus and food spots like Rockaway Taco.

Hurricane Hopeful “was way before it’s time,” Ben said, “we were all talking about surfing the Rockaways and everyone would say, ewe that’s gross. Everyone discovered the Rockaways on their own but I thought it was groundbreaking what we were doing.” 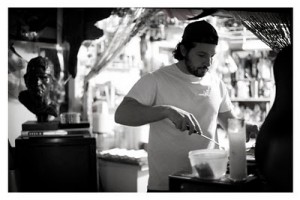 And before “underground dining” became all the rage in NYC, Ben was making lobster rolls underground. After trying lobster rolls in NYC and “frustrated” that they were “too fancy” he started the Underground Lobster Pound, which were lobster rolls the way he grew up eating them on Cape Cod. Greenpointers contributor at the time Liza de Guia, made this awesome video of Ben boiling lobsters in his Greenpoint backyard as part of her uber-successful Food Curated project.

After that he developed a seafood show on Heritage Radio, broadcasted from Roberta’s in Bushwick, called “Catch it, Cook it, Eat it.” The show info describes Ben, as “a ticking time bomb of waterway enthusiasm, and every week he explodes through your internet,” and the show as, “equal parts fishing show and aquatic infotainment, Ben takes you to all the wet parts of the east coast and explains how best to enjoy them, preserve them, and pull slippery creatures out of them.”

Ben explained how much he misses working on the radio show and recalls literally cooking fish with fisherman on air, but Ben’s catching enthusiasm and “made for TV” smile made his television debut of his primetime show, “Hook, Line and Dinner” on the Cooking Channel, a no brainer next move for the “chowder surfer.”

Ben described the cooking show as a “roving food tour,” that sometimes was a little too “hardcore” with all the fish killing and guts for the TV audience. He joked how it was really hard to catch anything when the cameras started rolling.

For Ben, in the end it’s all about fishing it up and while competing in the Annual Brooklyn Fishing Derby with his Brooklyn Urban Anglers crew, he noticed this “gray haired guy with glasses,” who he found out was Peter Kaminsky of New York Magazine, the New York Times, Food & Wine, and The Moon Pulled Up an Acre of Bass, among other titles.

Ben had been thinking about doing a cook book in which he would make a Chowder for each state call “Unchowdered Territory” when he said he finally “mustered up the courage to ask [Peter] if he would work on it and he said yes and suddenly I had one of the most renowned cook book authors teaming up with me…It was pretty amazing,” Ben said laughing, “but I’m not sure if he’d be into doing it again.”

Peter co-wrote The Catch and will be at tonight’s book signing. 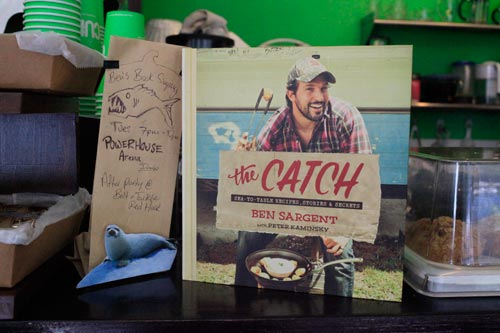 While beginning to work on this post this morning and in need of caffeine I walked over to Cup on Norman, wondering if I’d run into Ben, which he mentioned as one of his favorite Greenpoint spots, along with Photoplay, the bodega on Norman where he gets falafel and the Polish place where he gets pierogis that he can’t prounounce and argued with his Polish girlfriend in the background of our phone conversation about which spot in fact has the best pierogis in Greenpoint. They are not in agreement, but he settled on Krowlewskie Jadlo “the place with the knights in front on Manhattan Ave” and his admiration for the chef Krzysztof Drzewiecki.

While I didn’t run into Ben in person at CUP, I saw his book proudly displayed on the counter with a handwritten sign about the launch party tonight, which made me realize the sincerity of Ben’s facebook message and the support he feels from family, friends, and Greenpointers who were there with him every step of the of the way – even if it was just serving him his morning cup of coffee.

It was a serendipitous and proud moment to sit enjoying my ice coffee while paging through his cook book. Beautifully designed by his friend Annica Lydenberg, who saved every single clipping over the years, along with the savory photography by his photographer friend  Gabriela Herman, The Catch is essentially a scrap book of Ben’s outdoor adventures and amazing stories about the people and places and delicious recipes he’s discovered along the way. I want this book!

What’s next for Ben? A barn in Vermont he is building with reclaimed wood, where he will fish and hunt – a place he says is feasible to live off the land “as long you don’t mind eating venison everyday.”

Ben left us with some thoughts about Greenpoint, naturally:

This is not be taken the wrong way, but I’m seeing a lot of places that are popping up that are new and cool and hip and interesting and I also just saw a good Indian restaurant close. We have to be careful. If there is an authentic Mexican place and across the street a restaurant owned by some hipsters doing Mexican food, there is a place for both of them and people have to not be so shy. They have to realize at one point you are going to have a very boring neighborhood. You want a few $0.99 shops, you want the authentic Mexican place, you want the good Indian place. It’s going to turn very boring very fast. I love living in Greenpoint and these Polish restaurants are gems. They have to treat it as a neighborhood. This neighborhood is not them, it’s us, it’s everybody … It’s sort of ironic that we make a place look so cool, then it’s not cool anymore. That’s what we do. We work so hard building it up that it loses all of it’s original character.

Ben also asked that I make sure to plug the upcoming Brooklyn Fishing Derby (Sept-Oct), which is going to be a little different this year. It’s going to be shorter with fishing through the night for three days straight, campout style to achieve “the intensity it needs,” which will end with a fish fry so that Ben can show people that “you can eat the fish out of the East River, it’s the same fish that goes out to Montauk and people need to start thinking about the waters differently and then we can have a really healthy ecosystem.”