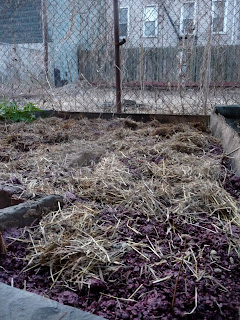 Late last year, post rooftop-farm season, I started working on a bioremediation project in north Greenpoint. The land in question is soil-turned-gravel-parking-lot, turned soil again: a yard so full of weeds that in clearing them, we recovered four bicycles, a set of chairs, and a barbeque. The weeds we cut back we piled to one side of the yard. They were too seedy to compost (even in the heat of a compost pile, weed seeds will often survive and germinate when you apply that compost to your yard the following year). The general plan was to let the stalks break down a bit, and then to burn them, although we’ll see what the building super has to say about that.

Being a green thumb in Greenpoint can be astonishingly difficult. Most beautiful plant life is cloistered in confined spaces: window boxes full of potato vines, vegetable gardens on rooftops, and the battered flax islanded in McGuiness Avenue’s medians. When I first began to tackle the ground here, I found it clayey (typical of North Brooklyn), and rumors abounded of its toxicity. In asking around, I found a good number of people were growing veggies in their backyard–but if it was in the ground itself, it was often a family that had lived in the neighborhood for awhile. Most everyone else was using the raised bed method, and that with timidity and at great expense. While NYC used to have a free compost giveaway, now most folks either buy potting soil and do container gardening, or have to buy compost.
For this project, on principal and for frugality’s sake, I decided not to buy dirt. Instead, I started brainstorming all my resources for creating good compost on my own time, and what other mediums I could use to get a good layer of soil going. As long as I was willing to set up a compost bin system and keep an eye on it for animal problems, from December (when the project began) to May (when I could transplant a lot of my flowers and, potentially, food crops), there was a good chance I could harvest some great soil. In the meantime, I could do some soil sampling and see what the yard had to offer. Whether or not I was planning on growing veggies, it would be important to know what the soil was like, simply to figure what I could grow, period.
There are quite a few ways to test soil. The easiest is simply to see what’s already growing. There are great guides that inform you on what your soil is like depending on what weeds are growing (there’s a little chart in Food Not Lawns by HC Flores, for example). It’s a sensible method, because it’s cheap, but also because it teaches you to identify the pre-existing ecosystem in your yard. It’s a nice benchmark, as you bring a yard to normal levels of soil quality, to watch the weeds that flourish change each year, or season. This yard was full of grassy weeds, felt rocky, and didn’t have great drainage. Because it’s a city landscape, and I imagine once a building stood on the lot, I also decided to send in a soil sample to a university extension. While I could do a simple pH test on my own, and even an easy DIY test to figure out if the soil was clayey, loamy or sandy, all that would tell me was what plants would take. To know if I could grow produce, or even how safe it was to handle the soil (lead-filled soil is not healthy!), I had to take a bag of dry soil and send it to Cornell, University of New Hampshire, or University of Vermont. All offer basic and more complicated results back; all, as extension agents, provide loads of useful information on the results.
In the meantime–never willing to wait–I decided to do a little remediation on my own. In creating the project, a friend had jumped on board to research and create a mushroom-based remediation effort, growing spores of oyster mushrooms on sacks of rye, to draw some of the toxins out of the soil. Finding the mushrooms was as easy as harvesting them gently in the springtime from Maine (which, as Peter was already there, was no problem); finding the grain was a phone call to Six Points and Brooklyn Brewery to ask nicely for a portion of their spent wastes. There was one section of yard that already had a little raised bed, which, with some research with the building super, I found had been filled with compost the year before to grow some ivy, ferns and flowers. Not fully trusting the soil, and not having sampled it, I decided to do some “lasagna composting” before planting anything in it. I had just gotten a wonderful gift from Christopher, down at Red Hook Winery: a trash barrel full of spent grapes. It smelled awesome, and, spread like a (maroon) carpet across the little raised bed, would break down deliciously under another great score–five milk crate’s worth of rabbit poop and straw bedding from the Greenhorn’s farm upstate. When the Greenhorns were ousted from Rufflands by a bad landlord, I had exchanged a day’s work helping pack up the rabbit operation for the sweepings and findings from the floor: nitrogen-rich poop, packed in with the carbon-rich bedding where the bunnies had lived. These two ingredients, plus cardboard laid on top and moistened to encourage a slow breakdown, made for a great pre-spring beginning to a brand new yard.