According to this story from DNAinfo, four shelter residents have had bad reactions to heroin they purchased near the intersection of Manhattan Avenue and Clay Street. According to one shelter manager, easy access to the drug on the northern end of Manhattan Avenue is causing serious problems in the area. END_OF_DOCUMENT_TOKEN_TO_BE_REPLACED

According to DNA Info: END_OF_DOCUMENT_TOKEN_TO_BE_REPLACED

New Homeless Shelter Could be Coming to Greenpoint

New York City just hit a milestone you might not have heard about. The amount of homeless people living in shelters is 57,665 people – a new record. According to a report released in October, New York’s homeless population grew last year, with almost 68,000 people without a permanent residence–all this while the number of luxury apartments for sale in Manhattan doubled in the last year. Meanwhile, homelessness is down across the country.

In the wake of this new reality, New York City’s Department of Homeless Services (DHS) announced a new homeless shelter will open in Greenpoint at 58-66 Clay Street. The shelter will be operated by Home Life Services, Inc. and will shelter 91 homeless adult families. A timeline for opening has not been set.

END_OF_DOCUMENT_TOKEN_TO_BE_REPLACED 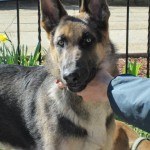 Here on Greenpointers we are dedicated to helping out animals and rescue organizations in need. On Easter, when I was at a guido Easter celebration with my Sicilian family in Long Island, I drove to Bobbi & The Strays to adopt this German Shepherd, Dutch. That day I learned a few things. If I eventually want my boyfriend to move in with me, then adopting a sweet but untrained horse is something WE should talk about, first. Communication is key.

And while we didn’t adopt my big boy, we did get to meet the amazing volunteers who work tirelessly to keep this no-kill shelter running. The place is great. You can feel the love. The animals are happy and well cared for.

Bobbi & the Strays is in desperate need of special pet food for their dogs and puppies who have mange. They specifically need Natural Balance Limited Ingredients, Dry & Wet food, and treats, DUCK & POTATO flavor. If anyone wants to donate food and drop it off to me in Greenpoint, I can personally (and by that I mean ask my boyfriend) to drive it out to Long Island. Or if you want to give me money, I will go and buy it on your behalf. Or you can make a donation directly to Bobbi & The Strays.

I guess I should have asked Jon about this first…

Be on the lookout for a small, gray and black Schnauzer mixed-breed dog named Prudence. She slipped out of her harness on Friday April 13, 2012 around 10:30pm and ran north on Lorimer towards Meserole. She is friendly but scared. She has a black collar with a green tag. If you find her, or have seen her, do not hesitate to contact her owners, anytime: