The launch of the NYC Ferry service (which had prices drop down to $2.75 one-way) will surely increase traffic from Manhattan to Greenpoint foreshadowing the imminent boom of housing along West Street. As a result, we should probably expect bigger crowds at the Barge this season. END_OF_DOCUMENT_TOKEN_TO_BE_REPLACED

Living in Greenpoint, we are lucky to have one of the largest collections of Polish restaurants serving traditionally meat-centric goodness this side of Warsaw. And this is the season for it. Gray, fog-dampened, winter stretches where day and night are hard to tell from one another lend themselves to comfort food.

Grab your sweatpants and your inner fat kid, and read on for what we think are some of the best places in the neighborhood to get your international grub on.

Essentially a traditional Polish bakery that decided they could fit some tables and chairs in the space and provide quick counter service. Perfect for grabbing golobki (stuffed cabbage) to go, or chicken noodle soup that’s still has a perfect layer of chicken fat reflecting on the surface. Every variation of rye, multi-grain, rustic, and peasant bread are up for grabs if you wanna carbo-load. This place is about as legit as it gets and it’s crazy inexpensive. Next time you’re in the area, do yourself a favor and get yourself the beet salad. 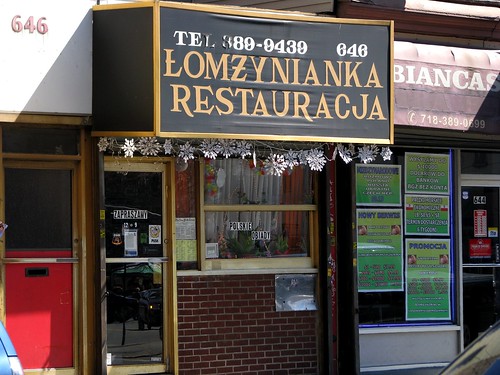 Outside of actually having a Polish grandmother, this place is as close as you’re going to get to getting a home cooked meal. The decor here is probably more famous than the menu. Permanent Christmas lights, multi-colored streamers that scallop their way across the drop-tile ceiling, and taxidermied deer heads are festooned with Hawaiian leis can all be found in what is essentially a Polish rec-room from the early 70s. The white borscht and tripe soup are some of the best we’ve ever had and that’s no small compliment. For the more adventurous among you, boiled pork hocks and tongue in horseradish sauce can be found. This place is an institution, and the most expensive thing is only $9. Did we mention that this place is also BYOB? Yeah. We’ve spent many an afternoon sipping Żywiec and nibbling on perfectly prepared farmer’s cheese in this little gem. 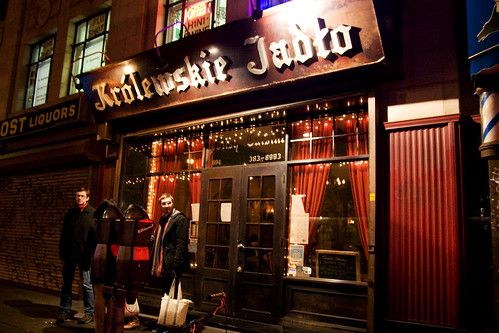 We guess when you advertise the fact that you used to be a head chef at Rober DeNiro’s Nobu,  we should know what we are getting ourselves into. Easily spotted by the iconic suit of armor found out front, Krolewskie Jadlo takes traditional Polish dishes and elevates them to more complex and innovative offerings. Sure, most Polish dishes are one of the infinite iterations of meat, cabbage, and potatoes, but head chef and owner Krzysztof Drzewiecki is doing his best to change that misconception. A still wildly affordable menu is real big on game meat. Stuffed wild boar with cognac pepper sauce, venison meat balls with garden dumplings and mushroom truffle oil sauce, and grilled pheasant breast served with port fig sauce can all be had for less than $15 bucks each. Grubbing on wild boar in a space that feels like a king’s mead hall is also a pretty tight way to spend an evening.

Growing up in Florida, we guess we’re just a sucker for a themed restaurant. Eating at  Karczma is like visiting a historical reenactment site. Not like Civil War reenactments, those are just weird. Once inside the decor and costumes do their best to convince you that you’ve somehow made a wrong turn and ended up in 18th century Poland. Traditional polish food, live polish folk music, and waitresses dressed in traditional peasant garb all combine to create the illusion of dining in a rustic country side inn. Peasant style lard is easily one of the most amazing appetizers we’ve ever had. Mixed with bacon and spices and served with warm rye bread, it’s probably a good thing that lard isn’t that easy to find. We’d put it on everything. Grilled blood sausage, pierogis, hunter’s stew, and spicy beef goulash are all damn near perfect. They also have a full bar and a pretty sweet happy hour on Thursdays. $3.50 Żywiec every Thursday from 5pm – 9pm is some of the cheapest beer offerings in town.

This list is by no means comprehensive. There are dozens of delis, bakeries, and cured meat spots peppered throughout Greenpoint. Visit one, be adventurous, and eat something with a name you can’t pronounce. Chances are it’s going to be something you’ve never had before and wouldn’t be able to get anywhere else. 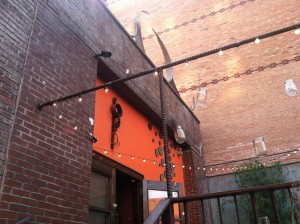 If you’ve lived in North Brooklyn for a while, you’ve likely walked by MyMoon a handful of times. Situated on North 10th and Driggs, this sprawling indoor/outdoor restaurant has been around for quite some time by Williamsburg standards  (I remember a friend having a birthday party there in 2006 or 2007, so that should give you an idea).
But the MyMoon of my younger years is not the one I visited last week. While the space is still massive, draped with trees and curated with large metal sculptures and purple curtains, the menu has shifted direction from a classic Greek, to Spanish-influenced Mediterranean. 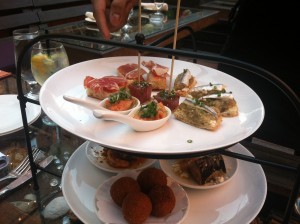 A perfect example of these new flavors lies in the Chef’s Choice Tapas Sampler. At $24, the sampler provides ample variety, while relying on customer favorites, as well as what is fresh and seasonal. While we were there, we tried the salmon ceviche, which was at once spicy and cool, citrusy and minty. It was the perfect scoop of flavors for a hot summer day. END_OF_DOCUMENT_TOKEN_TO_BE_REPLACED

Seriously craving Hominy Soup I walked to Commodore over on Metro. (They have sick frozen drinks and butter honey biscuits, too.) After dealing with the mess of walking 2 miles home with it, I resolved to learn to make it.

Fernando from Cafecito Bogota invited me into his kitchen.

Fernando is basically the nicest and most genius person in the world, plus an awesome cook. With already a degree in chemical engineering, he is working toward a degree in pharmaceutical and medical regulatory law. And he runs the restaurant while perpetually smiling.

Fernando is all about simple and fresh ingredients prepared with time and care. And since Bogota is high up in the Andes he says, “I like my soups, I like my hot chocolates, I like my malted wines.” YES! YES! YES!

First a bag of dried hominy is soaked overnight.

Next day, boil it in a pressure cooker (or on your stovetop) with salt, garlic and cilantro.

After it softens add a chicken breast (bone in.)

Simmer for a while until the hominy softens and expands.

Add peas and chopped potatoes. Simmer until the potatoes soften.

Not only did I have a great morning drinking delicious fresh squeezed juice and chatting with Fernando, I got to meet his super genius Forensic Psychologist brother Oscar, with whom he runs the restaurant. We capped the morning off with a delicious, warm and wholesome bowl of Hominy Soup.

“I want one of those,” a customer told the waitress after hearing the inappropriate grunts I was making.