While Greenpoint is still a bastion of Polish food, community, and culture, there was a time when pierogi purveyors were more ubiquitous than banks and drug stores, longtime neighborhood resident Richard Humann recalls. In the 1980s, the large population of single Polish men working for the American dollar made for a pierogi paradise, with bare-bones cafeterias selling the dumplings for cents at seemingly every street corner. The combination of gentrification and more opportunities to make money following the fall of communism led to the departure of many of the Polish men and the resultant closure of many pierogi vendors.

In 2018, there’s still cause for indecision when picking a pierogi spot in Greenpoint, even if the dumplings today are a bit pricier and a bit more infrequent. Below, a guide to the best local pierogis.

Opened by Krakow native and restaurant namesake Krystyna Dura in 1993, Christina’s is known for its no-frills food in a charming, but tacky diner-like space. The table service is speedy and the plates will reliably fill you up faster than you think. Sour cream will cost you 50 cents extra.

While the pierogi options at Karczma are limited, what they do have delivers. The waitresses are all dressed in traditional outfits or school uniforms and the restaurant itself feels from another era. The borscht bread bowl isn’t for the faint of heart, but it’s worth a second trip back to experience it.

The pierogi here qualify more for their price and location than quality, although they’re certainly tasty too. In the back of Krajan, a Polish bodega of sorts, fridges sit full of soup, milk, meat and boxes of pierogi, $8.99 for 12, meat or cheese. Nab some cow caramels on your way out: a medium-sized bag filled with them will run you just $2.99.

Commonly known as some variation of “The Knights” due to the armored figures guarding its entrance and the hard to pronounce name, Krolewskie Jadlo is a neighborhood landmark. It earned this status not only through its memorable front but also its authentic atmosphere, hearty food, and warm environment.

The name and homey but chic decor make Polka Dot seem a bit out of place with the neighborhood’s food scene at first glance. A look at the prices and offerings will show you otherwise. If you’ve got room post pierogi, try the zucchini pancakes – like a lighter latka.

Greenpoint, BK is known for its large Polish population, so I asked locals where to find the best pierogis. They led me here! These sauerkraut-mushroom pierogis were so fresh & packed with flavor. Sides: sweet carrot salad & cucumbers in a yogurt sauce. #ChowOrNever #DISHcover #NYC #greenpoint #bk #brooklyn #bklyn

This cafeteria-style eatery hasn’t been updated in decades, prices included. The atmosphere alone is worth a visit. Don’t get too comfortable while you wait for your order – it’ll be called out in Polish when its ready for pickup at the counter.

END_OF_DOCUMENT_TOKEN_TO_BE_REPLACED 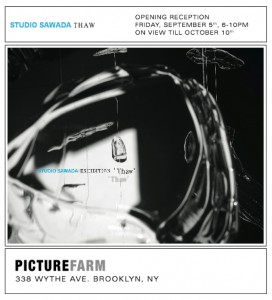 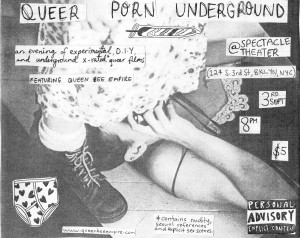 END_OF_DOCUMENT_TOKEN_TO_BE_REPLACED

In fact the reputation of the mice playing in the gallery while the cats are away in the Hamptons has allowed for looser and wilier events than the marquee fall, winter, and spring shows. But the idea that a summer exhibition is not one of a gallery’s more serious offerings still lingers – in Manhattan. END_OF_DOCUMENT_TOKEN_TO_BE_REPLACED

Wagmag is a non-profit Brooklyn Art Guide that promotes art venues and exhibitions in Brooklyn, including Greenpoint. Tonight is their yearly benefit at The Boiler (191 North 14th) from 7-9pm. Tickets are $20 to attend or $200 to enter the artwork drawing. This is a great chance for collectors to get in on amazing Brooklyn artwork on the major cheap. By donating $200 you are guaranteed artwork. There is a raffle drawing which determines which order ticket holders make their selection. I hope I get to chose first!
There is some amazing artwork in the raffle. My money is on: Ward Shelley, Scott Chasse, Brian Leo, Daniel Zeller, Peggy Cyphers, Mark Masyga, Robert Walden & Lisa Levy. 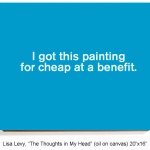 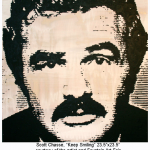 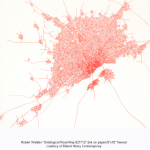 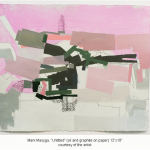 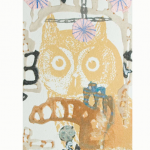 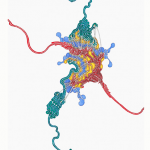 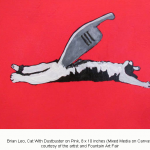 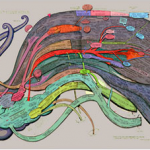 As a recovering art student I am reticent to even begin this review. My few brief and mostly booze muddled years at the museum school taught me a few things. First, that I am incapable of retaining any information about art history or theory, and second that the combination of vodka and mountain dew does wonderful and terrible things to the body.

This is the review of a layperson, or maybe just a drunk.

Ward Shelley’s Unreliable Narrator exhibit at Pierogi consisted of maybe a dozen paintings; all could be described as text based system diagrams. Each piece teased out minute and often-obscure details of systems from pop cultural groups to North American history to the knock on effects of the industrial revolution.

Example: the interrelated web that ties nerds to geeks to greasers to hipsters to metal-heads all leading back to some pre-human ancestor like Karl Marx.

Or Jung.
Or something.

It was mostly over my head.

That said it was beautiful and informative and I could have easily consumed an infinite supply of their free beer trying to dredge up those neural pathways I carved all those years ago in high school history, civics, or art history class. 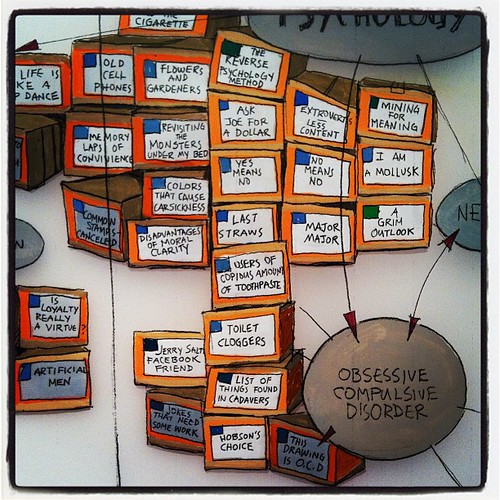 From a purely aesthetic standpoint the pieces were exquisite. It was apparent that many hours of thought and planning had gone into the execution, the text being connected by colored pathways that interlaced and crossed and re-crossed tracing ancestry and dependency to create genetic river systems complete with oxbow lakes and dead ends.

The works were simultaneously gorgeous, entertaining, and informative.

The fall season in the front room of Pierogi’s main space opens with flashes of light and smoke – or at least drawings of them. With the gallery’s boiler room annex usually reserved for installation and spectacle, the ninth street location seldom strays from the flat files of the entrance. This is rarely a bad thing and with his solo show, Cloud Wall, Michael Schall needs only illustrate the autumnal burst from drawer to wall.

The series of graphite on paper can be divided into two groups – mysterious and unmanned light sources, and caged cloudbursts. The theme of the Light series seems to be that of luminosity unbound from source, be it artificial or supernatural. The supernatural radiance rises from a Pool of Light (2009) at the foot of a mountain face. With no human presence in the drawing, the glow can rise (unnaturally?) from the pond without witness. Lava Tube, likewise, might just depict a reasonably explained source of glare – in this case, the entrance of a cave seen from within – but with the gallery viewer as the lone attestant, the effect becomes ominous.

Hoover Dam and Eidophusikan both reveal their light source to be synthetic, but again, with no drawn inhabitants, the light can shoot artificially downward or light an empty stage without the need or want of an audience.

It’s important now to remember that these are drawings (don’t forget to save the actual pyrotechnics for the Boiler Room) and that drawing gradations of light across form is fun – and Schall exploits this fun masterfully – but by depicting the illuminated scenarios (how else to show light?) Schall reveals not just loss of control of nature, but a kind of jealousy of nature’s freedom, even when it is manmade.

Stay Close To Me, It Will Be Dark Soon

Closed for most of the summer, Pierogi Gallery’s Boiler Space reopened with a show that has the space reflecting outward to space as if in anticipation of the longer, contemplative nights ahead.

For his second solo show there John Stoney has grouped video, sculpture, and pyrographs (burnt wood drawings) for a kind of curio box housing mementos and evidence of our solar system and how earthly materials echo these larger passing orbits.

Videos depicting the “Speed of the Earth” localize views of the moon and night sky from varying northern American vantage points. The gaze skyward here is made specific because the moon passes at different speeds depending on where the viewer is. The biggest screen shows the moon rolling by from the 41st Parallel. In sort of a pre-Galilean standpoint, Stoney has the moon, Jupiter, and Saturn, only in existence from and for the view of the observer.

The three sculptures in the show then become even more subjective and ‘grounding’. Placed at two corners and the center of the large dark room, they make personal objects of even the sky. Corner Piece #2 is a pile of stones collected from upstate New York but here becomes souvenir moonrock.

My Father’s Sky is a wonderfully made diorama of the night sky over water made with fiber optic tubing as a stand in for the stars. The scene is said to be the view from Galveston Texas on October 16, 1965. Is the time and place important for us to know? Not so much as the need to depict and build something for one’s own personal affirmation.

The centerpiece of the show, and perhaps the oddest addition, is Nocturne. A Corinthian column stands twelve feet tall in the center of the room with a woodpecker holding on just below the top uneven portion of the pillar. Made of polymerized gypsum and covered in silver leaf, Nocturne takes the show into surreal narrative. The one “invented” image in the show reinforces the need for tangible and landed reference while going in a different direction. When looking inward and not upward, the artist still has to unify subject with scenario. Could an extinct Ivory Billed Woodpecker claw on to a marble column (never mind peck it’s top part loose)? It could if they were both made from the same stuff.