American Bistro ‘Esmé’ to Open on Site of Papacitos

When Mexican restaurant Papacitos abruptly closed its shutters at 999 Manhattan Avenue last summer it was unclear what had happened and what, if anything, would be taking its place.

Now, happily, the space has been taken over by the team behind The Exley who are already well on their way to transforming it into a bright and airy all-American bistro in time for summer. END_OF_DOCUMENT_TOKEN_TO_BE_REPLACED If you’ve made it this far into the summer without downing a single taco, I don’t know whether to congratulate you on managing to avoid an increasingly ubiquitous food or console you for missing out on one of Greenpoint’s most versatile foods.  The taco has been called (was it Proust?) the ideal food of summer – cheap, good eating in the hot sun, healthier than most things that pair so well with alcohol, and easily scaleable – one is a snack, three is a meal, and five probably means a nap is in your near future.  Greenpoint, luckily, has a wide array of noble taquerias to compliment its scenic waterfront and vast oil reserves, and on one glorious afternoon, your writers sampled from each in turn.  END_OF_DOCUMENT_TOKEN_TO_BE_REPLACED Six Nights with the Kings of Karaoke

For four minutes and seventeen seconds, nothing else mattered.

I won’t go so far as to say that I didn’t think of anything else.  I had all the usual karaoke thoughts – “is this really what I sound like?”  – but it can’t be argued that there’s a better way to make yourself focus than to put yourself as far out of your own skin as only a microphone and a room full of strangers can.

Last week’s six-day karaoke bender started for me as most benders do – a few drinks in when the whole scene seemed loud, new, and fun.  It was my first night at that hidden (which truth be told describes the better part of creation for me) gem of a bar, Onyx, hanging out with a bunch comprised mostly of The Greenpointers staff.  Karaoke had long since broken into a steady stride, with the musical selections from the crowd covering a broad swath – your standard barroom hits interspersed with some surprising selections, most notably Kate Bush’s Wuthering Heights and a rendition of Avenue Q’s More You Ruv Someone, both of which were pulled off with style and gusto.  Although talent was amazingly strong on Monday, there was still room for me to butcher (half) of Islands in the Stream, and the vibe was overwhelmingly friendly and energetic.

The real show-stopper, though, was the energy generated by the night’s MC, Nithya, which was powerful enough to destroy sensitive electronics and stun small mammals.  After watching as she killed songs in a way that made you want to kill one too (she’s actually not a tough act to follow, despite being singularly talented at karaoke), we struck up a conversation in which it was discovered that Jen G. had actually photographed her in the past.  After feeling the energy in the room and hearing about The Kings of Karaoke’s six-night weekly tour, I knew what I was doing that week: going deaf and loving it.

Rock on after the jump. END_OF_DOCUMENT_TOKEN_TO_BE_REPLACED

Haven’t done a Weekend Blend post in ages, but there is so much going on this weekend that time begs for just one big post!

If you’re off from work tomorrow, you are in luck. Papacito’s is shooting a short film piece and are looking to share the experience by having a sick deal. This Friday July 22nd only, from 11am-4pm two tacos and two beers are $5 bucks flat. You’d be hard pressed to find a better deal in the hood on the hottest day of the year.

In God We Trust is hosting their third Backyard Bazaar of the summer. An open-air market featuring over a dozen vendors. In addition, In God We Trust just opened another location just last week at 129 Bedford Avenue!

Eat is having a Dinner & Ceramics event this Saturday. Serving on their newly made ceramics which some will be available for purchase, too.

The Persistence of Kittens: North Brooklyn Cats have some fascinating, charming cats and kittens who need happy, healthy homes. Stop by this Sunday July 24th, from 2 to 6 pm and you may just meet your next best friend. Muddy Paws Pet Supplies at 447 Graham Ave. allows us to invade their wonderful backyard every weekend. All cats & kittens are vaccinated, tested, and spayed or neutered if old enough. Adoptions require an application and donation. To see most of the cats and kittens we have available, check out the Petfinder page here. Not all cats listed on the petfinder site will be at the adoption event, but email and we can arrange a meeting at your convenience. *Note that we only adopt young kittens in pairs unless you have another pet already.*

No Bills: Stories of North Brooklyn, a sound installation by Brooklyn-based artist Nick Yulman is a project that features dozens of oral histories of North Brooklyn residents, business owners, and community leaders that will be streamed from “listening stations” installed at sites across Williamsburg and Greenpoint through September 2011.

At 1:30pm on Sunday, Yulman will host a tour of the sites that begins at McCarren Park Pool (Lorimer & Bayard Streets); a second tour will begin at 2:30 PM, and a reception will follow. For more information on this project check out the website here. To listen to a selection of oral histories, click here.

No Bills: Stories of North Brooklyn
Sunday at 1:30 at the McCarren Park Pool

Manhattan Inn is hosting another shot at becoming the title holder of the Best Bloody Mary in Williamsburg and Greenpoint. Beat out May 15th’s winners to become the NEW best. The event is sponsored by Reyka Vodka and head down early to sign up and take advantage of their Reyka Vodka Open Bar from 5pm-5:30pm. There will be 12 spots and anyone can enter. All ingredients will be provided, but contestants are allowed to bring additional “secret ingredients” if they choose. They will be judged on taste, of course, as well as presentation, creativity, and level of spiciness.

In addition to the prestigious title as creator of “The Best Bloody Mary in Williamsburg & Greenpoint”, the winner’s Bloody Mary creation will be featured on the Manhattan Inn brunch menu for one month, and they will receive a gift certificate as well.

Quickie: Papacito’s All You Can Drink Brunch

Papacito’s began their All You Can Drink Brunch option last week and if you didn’t get a chance to check it out, put it on your to-do list for this weekend.

Every weekend from 11am-4pm you can have a leisurely two hour Mexican brunch with unlimited Bloody Mary’s, Bloody Maria’s, Mimosas, Mexican Mimosas, or Champagne plus one entree from the brunch menu for $29.95.

I recently gathered a few Greenpoint ladies to help me test Papacitos’ new brunch menu. Close to ten of us strolled into the backyard on a hot weekend afternoon and in the next couple hours we filled the table with food and chatter. I requested everyone order something different so I could dig my fork into their plate and there was little disappointment as I circled the table and tasted pickled cactus, spiced tilapia fillet, mesca cake, soyrizo, and stuffed peppers. Each plate was specific in taste and presentation with portions too generous for a person to finish without belching out a food baby.

I chatted with owner and chef Cody about his inspirations behind the menu and he mentions it’s Mexican food with a twist, playing with ingredients as wide and varied as cinnamon-almond milk syrup and vegan crème while staying true to Mexican cuisine. With brunch a popular means to celebrate the morning after, these wholesome dishes will have you leaving with a satisfied grin and a belly filled to the brim. Now on with the delicious details: 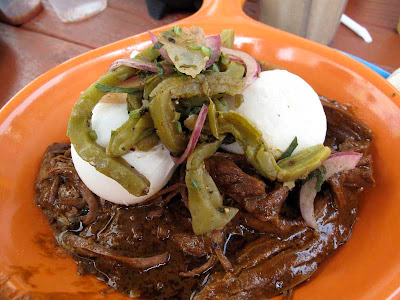 I tried the Mole ‘n Eggs which comprises of eggs that were poached to perfection (a slight stab with the fork gets the yolk bleeding) in mole sauce with shredded beef and pickled cactus salad that ended up being a bit too sour for me to adjust. As a whole it was a pleasurable mixture of gooey, chewy and crunchy sour that when accompanied by crispy chalupas makes for a colorful and tasty combo. 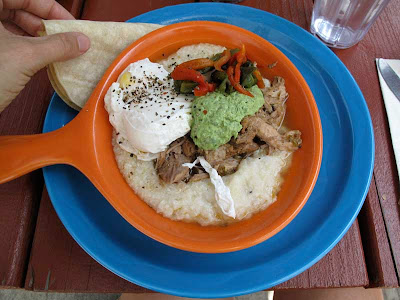 My favorite (although I only had one bite) would have to be the poached eggs with white corn polenta, which incorporates shredded pork with green chili sauce and roasted peppers. It’s rich and saucy and there’s something about mixing runny yolk and grits that hits a warm and comforting spot. 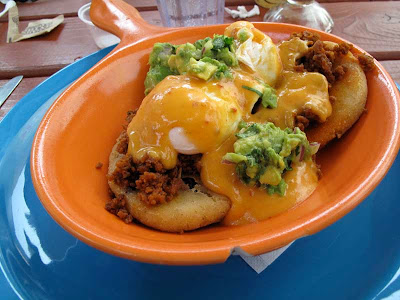 Next in the favorites line is the vegan tamale with Soyrizo, which despite being a tad too spicy for my low tolerance reverted my skepticism of anything deemed imitation meat. The roasted eggplant-tahini chile sauce was a beautiful shade of orange and the tamale was balanced between crisp and thick. The single bite I took was flavorful and inspiring enough for me to go buy a pack of soyrizo and try making this at home. 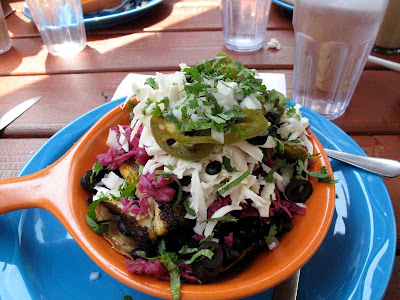 The thought of eating fish as the first meal was off putting but the two people who ordered fish taco salad nearly finished the plate and both agreed it was a damn good meal. I took a hesitant bite of the fish, which had a crispy and salty skin and I can only imagine it blended well with the pickled cabbage and cheese. The dish also includes black beans and sliced jalapenos, which cannot be tolerated on my end but seems to be a winner for others.

With this in note, test the brunch menu, especially with a group of fabulous kick ass Greenpoint ladies and return with a report (I’ve officially pseudo-mockingly christened a new Facebook group called Greenpoint Girls Group, which will meet for monthly brunches. Look for us and join if you so care.)