Childs’ difficulty in enrolling her son in a nearby public school reflects a growing problem in Greenpoint. Despite statistics from the Department of Education (DOE) that depict a large swath of northern Brooklyn as under capacity, Greenpoint’s Pre-K and elementary schools are filled to the brim, parents and elected officials say. END_OF_DOCUMENT_TOKEN_TO_BE_REPLACED 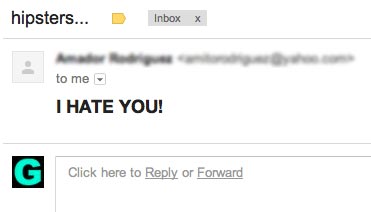 I got two gem emails this morning – one that made me wonder why I blog and the other that made me realize why I blog. The first had the subject line “Hipster” and when I opened it it said in bold “I HATE YOU.” (The fact that I am even protecting the identity of this loser is beyond me.)

Selling Candy Ain’t Enough: Come to “Bring Back The Music” at Brooklyn Bowl To Support IS318’s After School Program This Sunday! (6/23)

My breakfast in high school was Manhattan Special and a bag of cheetos. For lunch I’d eat a bagel or an ice cream sandwich. By 5th period, I was starving and I’d scrounge around in my backpack for a few quarters to buy M&Ms that a student in the next row was selling – in order to fundraise for the school.

Obviously Health Ed. classes didn’t sink in, and fundraising just meant a sugar rush, but among other amazing programs, the school did have a great after school program. I learned some of life’s most important lessons on the basketball court. And during the off season, when I wasn’t shooting hoops, I was out getting into trouble and eating Wendy’s.

Yesterday I met with Tamia Dantzler and Laura Arroyo, students of IS318 in Williamsburg, who with the guidance of Greenpointer Jane Pool, have organized a fundraiser this Sunday June 23rd from 6-9pm at Brooklyn Bowl (61 Wythe Ave) called “Bring Back The Music,” in order to raise money for their after school program, which has been the victim of recent city budget cuts.

While elected officials create tax abatements for high rise buildings on the water front, funding for public schools has been taken away. 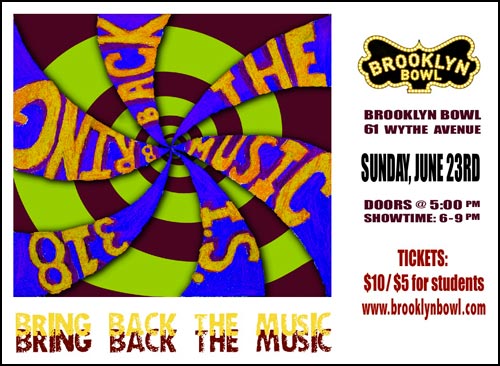 “Selling candy bars is not enough,” Tamia said, who receives homework help after school and whose grades have improved because of the program.

IS318 has received a lot of attention because of its brilliant chess team. A documentary called Brooklyn Castle, “tells the stories of five members of the chess team at a below-the-poverty-line inner city junior high school that has won more national championships than any other in the country.” IS318 is that school.

Walking down the hallway seeing championship banner after banner shows year after year of success, confidence and team building that will impact these students for the rest of their lives.

Not only is the chess team’s funding gone, but after school activities like basketball, art, math, science and music for students like Tamia and Laura are affected by the budget cuts, too.

And without an after school program, Tamia said she’d be “at home bored to death struggling with homework.”

Laura added that without it, “most kids go home, watch TV, hang out and do nothing productive.”

Jane Pool, a school mother, who described herself as a former “hardcore punk rock chick” who used to book bands for shows, uses her organization skills now to produce fundraisers for local organizations like OSA. She has wholeheartedly made it her mission, not just to fundraise on behalf of IS318, but to give the students the tools and know how to understand the issues and to organize this upcoming event themselves.

“This is a good age to get real about stuff, ” she said tearing up while looking at the girls and describing how inspiring and how she has “learned a lot from them,” during this process.

“I didn’t know I was going to care that much about the kids,” Jane said.

Jane’s care and support has in turn been uplifting for the students.

Tamia said, “This is the most exciting thing in my life so far!”

Sunday’s benefit at Brooklyn Bowl will surely be exciting with performances by Assemblyman Joe Lentol and Council Member Stephen Levin as well as the school band, the guitar ensemble, Newtown Creek Ramblers and the Jazz Band, which formed because of Sunday’s concert.

Valerie Keingstein, the schools incoming PTA President, whose son is in the newly formed Jazz Band said that the kids show up at 7am to practice 5 days a week, a period called double zero period, and her son is anxious to be there by 6:45am every morning.

This “culture of caring” at the school, as Jane described it, really shows.

“This is an amazing school that is trying to help kids stay active and focused in school so they don’t have to worry about a lot of struggles in life,” Tamia said.

If you do one this weekend, come out to “Bring Back the Music,” this Sunday at Brooklyn Bowl and support the students of IS318’s after school program. It’s $10 for adults and $5 for kids.

We have a choice to make. These students are the future of our city and will soon be making decisions about the world we live in. It is our responsibility to support them, even when our own city government decides not to.

As Jane put it, “this is a real fork in the road time for these kids.”  After school can be an enriching time that will help these young people grow into happy and successful New Yorkers. It’s up to us to help them get there.

If you can’t make it to the event Sunday, consider making a donation directly to IS318 now via paypal.