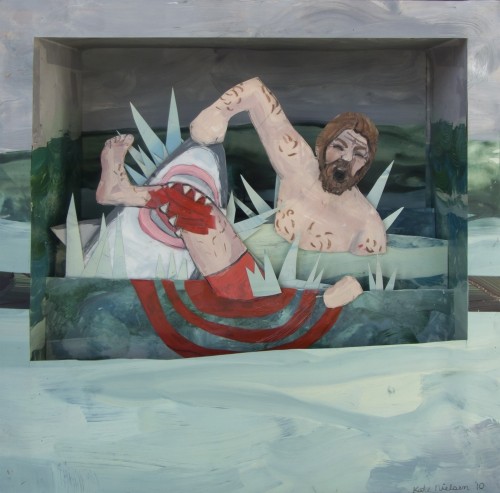 Greenpoint based artist Kate Nielsen bases much of her work on “survival tips” in the wild. As the sole individual successfully selling artwork on Amazon, she is also an example of a new type of artist’s preservation. Greenpointers had a chance to talk with the survivor on the eve of her inclusion in Calico Gallery’s Crowd Control. END_OF_DOCUMENT_TOKEN_TO_BE_REPLACED

Check Out My Body Of Work – “Throwback Thursday” at Calico

What pictures would you pick of yourself for a “now and then” slideshow? Would the choices accurately depict progression or would they represent a cultivated presentation of how you’d like to be thought of?

Calico Brooklyn’s “Throwback Thursday” is an art show that compares old and new works from a kind of high school yearbook haircut stance (the title comes from the urban dictionary definition to this effect). Pairings by ten artists are hung with a newer piece on the right and an older piece to the left. END_OF_DOCUMENT_TOKEN_TO_BE_REPLACED

In fact the reputation of the mice playing in the gallery while the cats are away in the Hamptons has allowed for looser and wilier events than the marquee fall, winter, and spring shows. But the idea that a summer exhibition is not one of a gallery’s more serious offerings still lingers – in Manhattan. END_OF_DOCUMENT_TOKEN_TO_BE_REPLACED 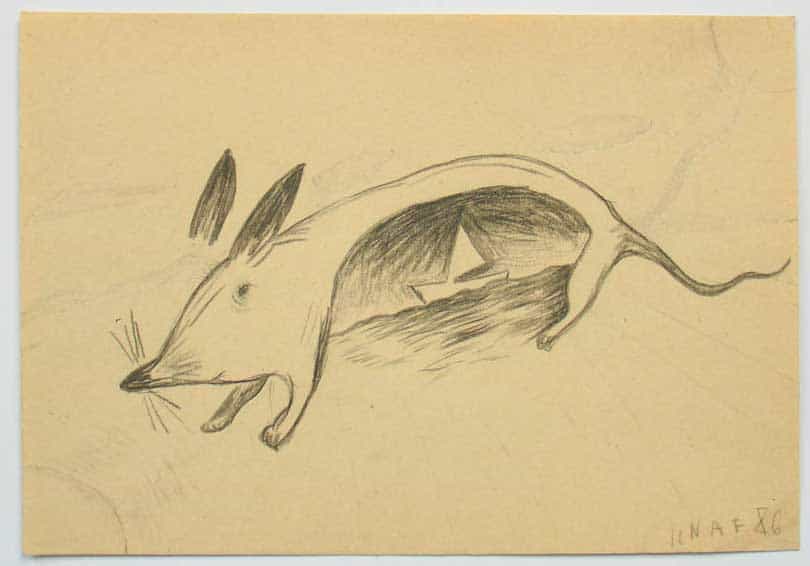 Those who view the recent return of drawing to front room popularity as a sign of economic pragmatism should stop by Cleopatra’s. A gallery more often associated with performative installation is now showing charcoals and inks by Polish artist Leszek Knaflawski (aka Knaf) in an appropriate display of inverted landscapes.
Knaf is part of the Polish collective Kolo Klipsa who refers to their drawings as diagrams to the groups “entireties.” If the entire here means a larger body of multimedia, sculptural, and performance work, then the work in this show stand as life rafts in a sea of oeuvre. 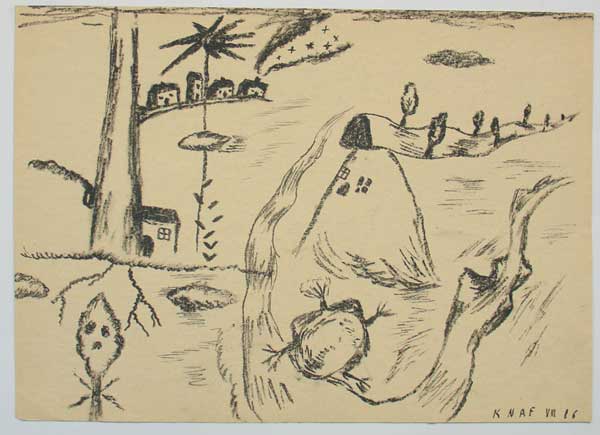 The theme is the floating ground and it’s containment in a small drawn space. Dissolving rats swallow sailboats (still on the ocean’s horizon), landscapes prolapse, and a house (the tease of stability) is only mildly complaisant when fused to the back of a happy cat. The inks might be mistaken, lazily, for Ray Pettibons, but the folk style of the rest cannot be denied their charm.
This is a show that well exploits the return to diagrams within entireties, of drawing within alternative space, and Polish thinking within a Polish neighborhood.

Greenpoint Column, Doors to the Bronx

If you ever do leave Greenpoint, check out Greenpoint artist Gabriela Salazar’s public project For Closure (Outdoors, the Bronx), freshly installed at the Bronx’s West Farms Sq train station on East Tremont ave. A towering stack of cards made from locally found doors, For Closure illustrates current and ongoing fragility in security and housing while fitting in surprisingly well with its local surroundings. The sheer prefab modularity of the work might have most passerby thinking it a relic of local sixties or seventies urban landscape design.

Monumental and ambitious, Salazar’s new construction furthers a body of work that questions the faith and assumption of architectural structure and support. The Greenpointer was able to talk with Salazar about her last project for The Build Up at Greenpoint’s own Fowler Art’s Collective.

The Specifics of Gabriela Salazar

With the infamous white cube dissolving into the narrative of the real world, artists and exhibitors are exploiting the dialogue found between lively work and worldly surroundings. It was modernism that insisted on hermetic environments. Art today is less autonomous than it has been in over a hundred years and the fresh air continues to invigorate post-profane practices. END_OF_DOCUMENT_TOKEN_TO_BE_REPLACED

With two shows currently up at Greenpoint’s own Alan Nederpelt Gallery and Elizabeth Moore Fine Art in Manhattan, English born and Greenpoint artist Paul Duncan may not be so much a “madman” (as the Nederpelt show titles) as a canny guide through madness. To call Duncan’s paintings and drawings surrealist, wouldn’t be far off, but it would be a lazy stray from what makes his own personal landscapes so particular. Having the actual tour guide walk us through his world – as The Greenpointer was able to at the Nederpelt space – was to enjoy the full experience of being chaperoned through the “hyper-magical,” as the artist puts it.

With a mixture of recognizable cultural objects and invented characters, the work in the show manages a consistent hodgepodge of initially familiar wanderings that quickly dive into murkier depths.

“The image needs to step away from the object to another level,” Paul says. With a roguish demeanor and swashbuckler looks, the charismatic artist is well suited to speak in front of his hallucinations. To call the art ‘psychedelic’ would be misuse of another clichéd and inappropriate term (a term all too often stamped on to fantastic imagery). “This territory is not about drug exploration. It’s to do with the mythological element we all carry around with us. With my hand and some paint, I can filter these worlds.”

In fact the worlds depicted here aren’t really too far from the one we live in. “My trip to India and that region was very profound for me. To walk through the Himalayas and see Nepalese art that I had only seen in books and actually experience these things was extraordinary.” Like his artwork, Duncan’s storytelling can suddenly shift from dreamscape to visceral reality with surprising fluidity. “Well, I also got very ill on this trip after swimming in the Ganges! I lost half my body weight while my stomach swelled. After treatment from a western Doctor I had a chance to go to Goa where the illness returned and I was next found collapsed in the middle of a field. For days I lay on what I thought was surely my deathbed. It was here that I had the experience of being bathed in golden light. Now I’m not as religious man, but I remember that light as an angel. Whatever it was, I felt much better after that!”

END_OF_DOCUMENT_TOKEN_TO_BE_REPLACED

The way images move through a photo studio, it makes sense to put a collage show in one in order to symbolically organize all the flashing fragments. Picture Farm, one such studio, will be housing All That Remains, a group exhibit presented by the local, yet nomadic project called Ugly Art Room.

Before the dreamlike and poetic mosaics land on the studio walls, they’ve collected in the Greenpoint apartment of the show’s curator, and one of 28 participating artists, Charles Wilkin. The stored works seem to mesh naturally with Wilkin’s own workspace and personal collection.

“My discovery of collage was accidental” the artist told Greenpointers. “Running late to a drawing class with an armful of photos from the previous class – but without pencil, paper, or drawing materials – my teacher suggested that I just do collages.” Wilkins is also a graphic designer and that history honed his understanding of the medium. “It’s all scraps that came from the graphic arts, reassembled by artists. And that’s where the turning point came for me. A career commercial artist, good at it but almost bored with design, I took the collages I was doing at home and was able to apply them in a design setting.”

It’s just that blurring space between “fine” art and illustration that this collection makes work. “David Plunkert was the first artist I saw that was doing that similar style that was illustrative without being illustration”. Wilkin’s casual and informed manner echoes All That Remains’ mix of canny and imaginative creativity. “Design, illustration, typography, to me its all art. It’s all composition. One thing that collage did do was free me from the constant problem solving of making a logo.”

Talking to Wilkin in his home and around his own collection and studio space, it’s easy to see why he sticks with the physicality of the LIFE magazines and discarded photo albums he’s gathered over the years. Only a few pieces in the show are digitally produced and he reminds himself that the work is reused print.  “I love the tactility of paper and the physical act of cutting, gluing, and arranging paper. On the other hand digital collage frees the image from the size restraint of the found object. It can be bigger.”

“With the norm of sound bites and the world shrinking and cultures clashing together this show becomes more relevant. I wanted to show what’s going on now but the work I found was never overtly political.” Looking at the work only bolsters Wilkin’s excitement for what he has unearthed. He’s done a good job at collecting the collected.

“I think this kind of work has always been on the fringe, so now is a good time for the show. When you look at the work here, even though there are different styles, there is an underlying theme of mystery and uncertainty that’s very relevant to what’s going on now. It pulls from the past to analyze the present so that hopefully we can move to the future. That’s the beauty of collage.”

Walking around the local galleries, you might notice exhibits showing a theme of pointless and oppressed labor! A scary new take on recession art? Echoing the chill of nearby Rawson Project’s ominous installation is Daniel Turner’s Mariana. With a quieter sense of menace, The Journal Gallery displays Sisyphusian evidence of ironic toil, rather than monuments toward it.

The brash bareness of the show’s appearance might have some passerby thinking that the space is between shows. What they could easily miss from the street is a silvery haze marring the perimeter of the white cube – a smudgy pattern made by pressing steel wool against the walls.

The general effect is that of accidental, haphazard rubs mimicking a low hanging fog. The significance though, lays in the act it records. The height of the marking hovers around a foot-and-a-half to two feet – about the level of someone scrubbing on hand and knees. The steel wool usually meant for cleaning becomes a staining agent here. The irony is completed by the encirclement of the mark. The more the action attempts to clean the imprint, the worse it gets.

Is this a statement on post-minimalist futility or a tease at the endless drudgery of a cleaning crew’s job? The general lightness of the ring suggests the former. The “artist” thought the ethereal nature of the work best suits the fleeting nature of most art labels and the “janitor” knew enough to stop rubbing before things got worse.

The Journal Gallery
168 No. 1st
Through October 23

Martin Esteves is a Greenpoint based art critic, and writes for his own blog The Life of St. Martin. Read his review on Davina Semo at Rawson Projects.