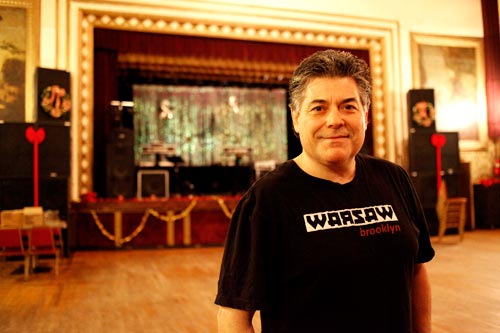 When I met with Warsaw’s general manager Mark Chroscielewski to talk about hosting Greenpointers events at Warsaw, I met the nicest guy and discovered the most amazing space. I had to take his portrait. I learned that Mark’s father was on the board of Polish National Home for over 40 years and Mark actually founded the Warsaw, turning what many think to be a private club into a venue for some amazing rock concerts. (I saw Gogol Bordello there and the Dead Milkmen are coming in March…)

Make sure to come to our Escape The Doldrums Dance Party on 2/1!

While walking my dog on a particularly desolate part of West St., I’ve often wondered about the unassuming “Hollywood Stunts NYC” sign that hangs over an orange alley gate between buildings. My imagination tends to set a scene of an Evel Knievel style crash course on the other side, complete with a row of flaming buses and an alligator pool. This weekend I popped into the Saturday open session to see what it was all about and found something less grandious but way more exciting.

The training center is located about three quarters of the way down a typical Greenpoint alley, lined with box trucks and wooden palettes. A set of doors opens to an airplane hanger sized space filled with trampolines, gymnastics equipment, and one of those over-sized air cusion things you’d find at the other end of a “Fear Factor” challenge. More tall than wide the space is suited perfectly for the focus of the class, the high fall. Students learn the basics then gradually make higher and higher falls, rolling out of the air cushion below with bragging rights and an adjusted sense of gravity.

The man who runs the place, Bob Cotter, has been a stunt man for 25 years. He’s worked on films such as Rounders with Matt Damon and with bands like Bon Jovi and The Rolling Stones. He opened Hollywood Stunts in 2007 in the Bronx, and then moved the center to Greenpoint. As we stood outside of the training center motioned towards a dented-up yellow cab. “We actually shot a car scene for a Norweign television show last week,” referring to his crew of professionals and graduates of the center.

Hollywood Stunts offers classes in high jumps, the trampoline, fighting for film, as well as one and three week intensives for those more serious about getting into the business. Anyone above the age of ten can sign up and the only other requirement is that you’re in good physical health and have no pre-exising injuries. They offer private group lessons and birthday parties. Check their website for more details.

Before my inevitable retreat into cold weather hibernation, I’ve been running around like a squirrel trying to sample as many of the new hangouts that have popped up in Greenpoint over the summer. Here are a few places you might want to check out before Autumn’s arrival–which is sadly Friday.

Hidden away on the corner of Franklin and the street of its namesake, Calyer was opened a few weeks ago by the owners of Anella, with little fanfare and no sign. The interior is lovely as you might expect, combining a touch of “noir” with some the space’s original rustic beauty. The food was described by the waiter as Spanish influenced and should be ordered tapas-style. This makes the menu a bit more spendy than it appears at first glance, as a typical plate runs around $10 to $12. Avoid the salads as they tend to be paltry, but do try the seafood plates or any of the more substantial entrees. I hear the Chicharrones are addictive as well. They also have a cozy bar and a decent selection of Spanish wines.

Greenpoint may be the Polish capital of New York, but those who live north of Greenpoint Ave. know of the many delicious Latino inspired restaurants/laundromats/in-the-back-of-a-bodegas tucked away here. El Toro is a new take-out style taqueria that recently opened on Driggs. The vibe is causal and welcoming. I was impressed with the flavor and thoughtfulness of the parings. The kimchi and marinated steak taco is fusion heaven. The fish and shrimp are served cold, which may put off purists, but the savory sauces more than make up for it. Those familiar with Snack Dragon on the LES might reconsider their fourth meal until after the cab ride back to Greenpoint.

I finally hit The Lobster Joint last Friday on what was a particularly cool September evening. As a native New Englander this made me feel right at home. So did the perfectly seasoned chowder, reminding me more of a lighter Rhode Island style broth than the creamy Massachusetts style you may be used to. The Lobster roll was also surprisingly authentic, with warm buttered bread making it all melty and sweet in your mouth. The mussels and fries are a plate large enough to share and the Lobster Ale makes it all go down smooth. Needless to say I will be returning a few more times this fall.

Hope everyone is preparing for the big hurricane coming our way this weekend. Thought I’d post a map of the Greenpoint evacuation zones for a Category 2 storm like Irene, as it’s been difficult getting on the NYC.gov website due to all of the traffic. Make sure you have 5 days of food, plenty of bottled water, a battery powered radio, and a flash light or two in case we lose power for a few days. Stay Safe!

Map courtesy of The NYC Office of Emergency Management

This weekend I had the chance to sample some delicious Brooklyn-made cocktail bitters from one of the guys who brews them. Benjamin Ahr Harrison and friends run Hella Bitter, a small-batch bitters company recently founded in Williamsburg and sold at a select few NYC specialty shops. There are three different flavors; Citrus, Wormwood Aromatic and Vanilla Kumquat—all brewed and bottled by hand.

Hella Bitter is currently trying to raise money to start a Bitters & Seltzer cart intended to wheel the sophistication around the neighborhood. Watch the kickstarter video here and help make it happen or swing by Whisk and pick yourself up a bottle or two.

Every few months FEAST (which stands for Funding Emerging Art with Sustainable Tactics) takes over the Church of the Messiah on Russell Street across from McGolrick Park. There are performances, food, poetry, and most importantly, a dozen or so artists competing for your vote. Whichever artist’s proposal gets the most votes receives funding from the pool of the donations collected at the door. Make sure to get there early to enjoy the delicious locally sourced food and beer!

Tonight at Brooklyn Brewery there will be a cocktail sampling from some of the neighborhood’s best bartenders. Tickets are $35 at the door and all proceeds will benefit the building of the Northside Town Hall Community and Cultural Center. More info here.

Earlier this week, I greeted my work day aboard the upper deck of the East River Ferry, which just started service from Greenpoint’s brand new India St. Pier. My fellow passengers and I lined the ships railings like wide-eyed pilgrims, taking in the curious wonders of the shoreline as we passed. We arrived at 34th street in under ten minutes, our sea legs barely earned.

Once in Manhattan however, the connecting shuttle bus detailed on the pier’s ferry map failed to materialize and I ended up walking the twenty or so blocks to my midtown office. I did eye some possible pre-ferry/after work watering holes within the squeaky clean blocks of Murray Hill (Pinetree Lodge you may have a Greenpoint regular). I would recommend bringing your bike as the travel options from that far east on the island are pretty limited and are not eligible for a transfer. Over all the experience was pleasant but not entirely practical.

The weekend service was a different story. On Saturday, my girlfriend and I waited for twenty-five minutes amongst a growing crowd on the pier, which was shadeless and hot in the mid-morning sun. The boat eventually docked and soon a ferryman approached us from the opposite side of the gate. “Only 6 of you…” He told the crowd of about fifty, a dozen of them a group of teenage bicyclists perhaps hoping to spend the day riding and picnicking on the lush greens of Governors Island. The lucky few hurried on board, the rest of us left to wait another half-hour on the pier, or to give up entirely.

I’m sure ridership will drop-off significantly once NY Waterways begins charging four-dollars a ride and I do understand that they need a few weeks to work out the kinks (they’ve already issued and advisory addressing capacity issues), but their slogan “Relax. We’ll get you there.” might take some time to stick. Our neighborhood has been underserviced for a long time and the Ferry is certainly part of the solution, but it may take some coordination with the MTA before a sea voyage becomes a practical part of many Greenpointers commutes.

While explaining to friends who live outside of Greenpoint how wonderful our neighborhood is to live in, I’m often expected to clarify some area folk-lore. Yes there is an oil spill larger than the Exxon Valdez bobbing gently beneath our feet. The live poultry slaughter house a few doors from my apartment does indeed smell worse in the summer than in the winter (when feather covered rivers of chicken tears trickle down the sidewalk). No, the old Polish ladies here are not disdainful of their new younger neighbors—they are, more often than not, polite and welcoming even when I break it to them that I do not speak Polish.

I moved to NYC in 2002 and outside of a few stints back up in Boston, I have made northern Brooklyn my home. I became a Greenpoint resident two years ago with my girlfriend and dog and have already spent time in two different apartments. The first was above a funeral home across from McGolrick Park where I often wondered about but seldom entered The Fireplace bar and grill. The current is on the Franklin Street side of the neighborhood. I consider finding this apartment my most triumphant Greenpoint moment. I can walk a block down the street and eat free pizza with a pint of beer at any conceivable hour, my girlfriend often reminds me that too many brunch options does not qualify as a “real” problem, and my dog has a backyard to run around and dig holes in (this is until she digs one deep enough to reach the aforementioned oil spill, in which case we ride our spewing fountain of riches into one of those fancy new condos on the waterfront, Beverly Hillbillies-style).

As a member of The Greepointers illuminati I hope to address the areas of interest that are most important to me. These include but are not limited to, delicious food, dimly lit bars, K9 matters, afternoon celebrity sightings, laundromat empanadas, and all of the great arts and culture happenings that make this neighborhood one of best in the city. I also hope to clarify any and all Greenpoint myths for the “out-of-pointers” who are not too shy to ask.

I love the neighborhood and am so glad to be a part of it.