The Lobstahs Are Coming! Lobstah Palooza (9/21) 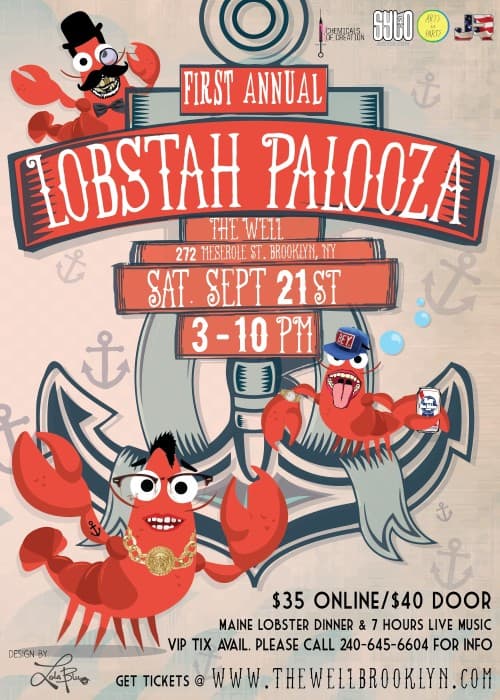 On Saturday, September, 21, 2013 at 3pm – 1500 big, mean and oh so delicious live Maine lobsters are arriving at The Well (272 Meserole St, Bushwick) inside the historic Hittelman Brewery for a day so aptly named Lobstah Palooza!

Bib up, arm yourself with butter and hunker down!

Over the course of seven hours you will feast upon 1.25lb of Maine Lobster or Lobster Roll plus scalloped potatoes, fresh corn on the cob, a Brooklyn-rooftop grown green mix and a freshly baked roll – and obviously, unlimited quantities of melted butter.

If you think you are only getting succulent lobster – think again. The hottest East Coast DJs, Chemicals of Creation, DJ Sylo & Julian Rhine, will be spinning for your listening while eating pleasure.

And the space… The Well, which was a gigantic brewery back in the day has been converted into an amazing event space and bar with a backyard beer garden.

Organizer of Lobstah Palooza, Gus May was inspired to organize this big lobster party from the legends about epic lobster runs he heard from his Uncle Neil. “He used to make lobster runs to Maine and back once every summer in the 1980′s, and deliver thousands of lobsters to host huge parties in his native Cecil County, Maryland,” Gus said,  “The whole lobster bash is really in honor of him and the spirit he embodied.”