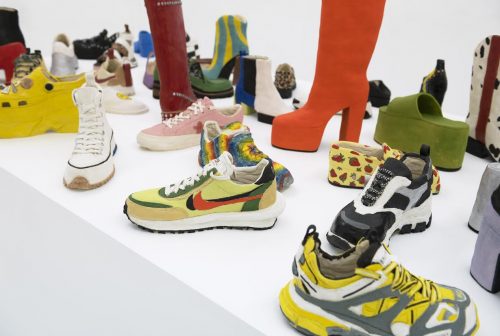 It’s hard to not be beguiled by an art show entitled You’re Doing Amazing Sweetie — now on view at Launch F18 until October 19th — and it’s even harder to not fall in love with the whimsical, colorful ceramic shoes created by Didi Rojas for the show. Rojas uniquely combines her day job work with her craft, elevating seemingly simple creations into something creative and singular. Learn more about this week’s Thursday Spotlight below!

Greenpointers: You live and work in Greenpoint, right? Any favorite spots in the neighborhood?

Didi Rojas: I live in Bed-Stuy but my studio space is in Greenpoint. There are so many good spots in the neighborhood. One of my favorite spots in Greenpoint, and probably all Brooklyn, is McCarren Park. I love walking my dog, Charlie, around the park whenever I bring her to the studio with me.  Other favorite spots include the McCarren Deli (I usually get the Smoky Jack sandwich for lunch here), Five Leaves (whenever I want to treat myself) and Bernie’s (martinis and mozzarella sticks)! 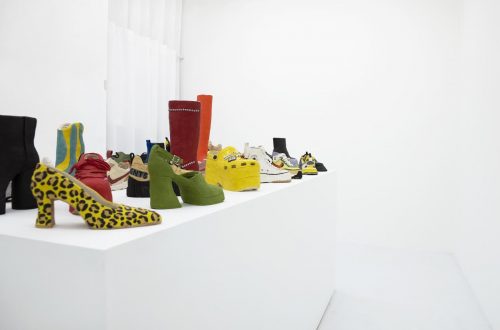 Your day job is at Grouppartner Ceramic Studio, but you also create some of your work there, yes? I feel artists don’t always talk about their day job, but yours seems to be one that also feeds your work. How does that relationship balance?

I started working at the Grouppartner Studio when I was still in college and I eventually was able to get my own studio space in the same building. I’m really grateful for the relationship I’ve built with the studio and with the people I work with there. The space has changed so much over the years and it’s been fun getting to be a part of its growth. It’s a space I feel very comfortable in so it’s pretty great to be able do both my practice and day job in the same building. The Grouppartner Studio feels like home to me and I feel extremely lucky to be able to have a job that also helps inform my practice.

I love the shoes you crafted for you Launch F18 show! What are they made of, and how did they come to be?

Thank you! The sculptures are ceramic. I made my very first ceramic shoe over three years ago. I had been working at the studio and had a pair of Nike Air Force sneakers that were covered in clay from wearing them there daily. They looked like they could have been made out of ceramic so I had to try making one. I haven’t stopped making ceramic shoes since then. Fast forwarding a bit, the shoes for the show You’re Doing Amazing Sweetie at Launch F18 are similar to my previous bodies of work. There are over 40 included in the show and all but a few were made this year.

Silly question, but are the shoes in any way wearable? If not, what do you want to do with them when the show is done?

The ceramic shoes are not wearable, but I like to pretend. I often take photos of me pretending to wear them. The idea for them also somewhat originated from a “fake it till you make it” kind of playful mentality.

I’ll be keeping the sculptures that don’t sell from the show as part of my own collection.

Are there any upcoming projects you’re excited about/want to share?

My sculptures are being featured monthly in Vogue Italia’s magazine. It’s really crazy and cool getting to see the pieces in print. I’m also currently working on a couple photography and video projects as well as a book featuring the pieces from the show at Launch F18. More ceramic shoes are also in the works!

Meena Hasan’s newest show at LAUNCH F18 is, what she brilliantly and comically calls, a “kaleidoscopic onion.” To understand that, one must first understand her vivid works that stem from diverse compositions and series but are now in giddy and ponderous conversation with each other in one show. She shares this LAUNCH F18 exhibition with the Tommy Kha, who, alongside Meena, is exploring imperialism through a contemporary lens. To learn more about Meena and her work that “investigates and reveals Asian American experiences,” read on, follow her Instagram, and visit “Other Echoes Inhabit The Garden” at LAUNCH F18!

Greenpointers: You’re a Greenpointer yourself, I hear! How has the neighborhood treated you. Any favorite spots?

Meena Hasan: Yes, I’ve been in Greenpoint for about six years and I love it. I am hesitant to tell too much, since one of the greatest characteristics of Greenpoint is that the best spots feel secret, tucked away and well supported by local patrons. Northside Bakery has amazing Polish food – schnitzels and stuffed cabage are my go to. I am always on the hunt for good curry and am lucky to have a legit take-out Indian food spot nearby, Moharani, run by Bangladeshis. They use all the right spices and do not water down their food like most places. I also discovered the Lite Bites lunch hour, they have insanely tasty Trinidadian curries and rotis during the week, but you have to hit it before 2pm to get the choicest morsels. Possibly the best hot sauce I’ve ever had too (in the US). Not to get all romantic about it, but the distinct flavors really do unveil themselves slowly on your tongue, in your throat and belly, like a raga, and trying to decipher their recipe is great fun.

Your current show at LAUNCH F18 Gallery in Tribeca deals with “post-colonial legacy,” the press release says. Can you dive into the works you contributed to this exhibition?

This show, titled “Other Echoes Inhabit The Garden” unfolded over time. I like to think of it as a kaleidoscopic onion of distinct shapes and ideas reflecting each other across and through the room. Each of the works that I included is from a different series that I have been working on for the past few years and it’s fantastic to see them all hanging out together. Included are a first-person perspective or PoV painting as I call the series of putting on gold bangles, a small paper sculpture of my grandmother’s earrings, a portrait of my mother’s nape and a large hanging paper piece that investigates and transforms a Chintz pattern (a calico textile made in South Asia for the British). Also included are two small gouaches on cardboard that were made as meditations in between the making of the above pieces.

The show was an experiment in many ways, a chance to juxtapose the many distinctions not only within my pieces but also those in contrast to Tommy’s works, with the hope that they would converse, open up and find meaning through their interaction, that they would “echo” in other words. This could be like any group show, but in our case it was particularly significant given our shared desire to investigate and reveal Asian American experiences through our works. Tommy and I, like all children of immigrants, and honestly like the majority of individuals in the world, have inherited the post-colonial legacies of our families. The show seeks to pay respect to this inheritance and, particularly, the matriarchs who have shaped and raised us, whose influence pervades the works and, of course, our daily lives as well. END_OF_DOCUMENT_TOKEN_TO_BE_REPLACED