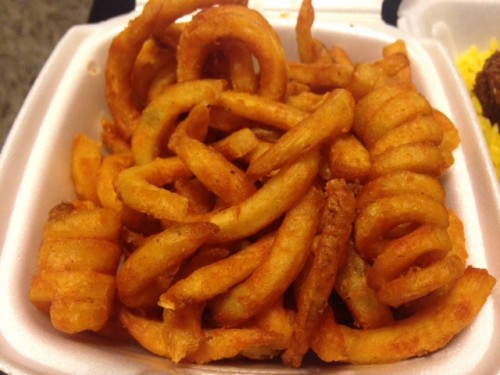 Sometimes nothing else matters in your life besides an all-encompassing need for curly fries at 4:00 a.m. You can get regular french fries almost anywhere. But curly fries? Especially spicy curly fries? That’s when you go to God Bless Deli.

END_OF_DOCUMENT_TOKEN_TO_BE_REPLACED

Sure, people come to Cachaco for the food, which David Wanger, a nearby resident who came in for tacos on a recent Sunday afternoon, carefully described as good and cheap and fast. But it becomes clear that Wanger and others also visit Cachaco because of the people. END_OF_DOCUMENT_TOKEN_TO_BE_REPLACED

This week, Rosie and I set out to try the famous falafel at God Bless Deli, which is somewhat of a Greenpoint legend among the broke, the inebriated, and the down and out.

It might not be now, and it may not happen for a while, but at some point while living on these hallowed streets, God Bless will sneak up on you. It might be at 3am after downing one too many $1 jello shots at Capri Social Club. Or maybe you will find yourself gazing at the $3.50 falafel sandwich during of those in-between-paycheck weeks when your stomach is craving a liter of garlic sauce on a mass of fried chickpeas. If you haven’t found your special falafel moment yet, it’s only a matter of time. And we can’t promise that it won’t be involve at least some level of shame. END_OF_DOCUMENT_TOKEN_TO_BE_REPLACED

Perched on a corner of McGuinness, Oasis of Greenpoint (230, Calyer St) is not in the most beguiling of locations but, when I called in on Sunday afternoon, the place tried hard to live up to its name. The sun was streaming through the huge glass windows and a very happy flow of customers came through, many exclaiming that they were fans of the Williamsburg branch and how delighted they were that one had opened in our hood. END_OF_DOCUMENT_TOKEN_TO_BE_REPLACED