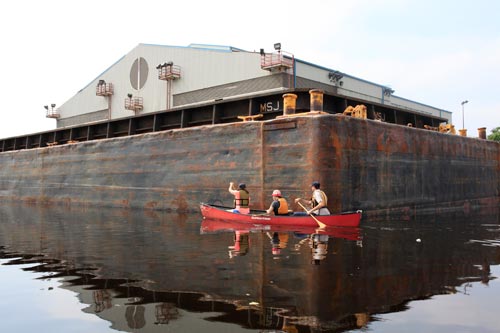 Part of why Greenpoint is so special is because of our waterfront location. And while many still make disgusted faces when thinking of getting anywhere near the Newtown Creek or The East River, others are paddling up our local waterways and even fishing off our piers.

We still have a long way to go before we can even safely touch the water, but with more awareness and recreation on our waterways, the faster they will be cleaned up for future generations to enjoy.

City of Water Day, which is taking place this Saturday July 20th is “a celebration of the potential of the waterfront,” and lots of events are going on nearby.

The main events take place between 10am – 4pm on Governors Island and Liberty State Park in NJ, but many neighborhoods are participating as well.

The North Brooklyn Boat Club is paddling to Governor’s Island, where lots of fun events like a cardboard kayak race (and overnight camping) are taking place! NBBC’s paddling spots are full, but you can meet them there by taking the ferry over to Governors Island.

You can also reserve a spot on a free boat tour around the city.

While nothing specifically is organized on Greenpoint’s waterfront, enjoy a picnic in Transmitter Park or at the Newtown Creek Nature Walk or watch the sunset on the India St Pier or the Manhattan Ave Streetend Park. We have lots of waterfront access in Greenpoint.

If you want to travel to the other end of Brooklyn, Greenpointers who brought you the Newtown Creek Armada along with the Gowanus Dredgers & Brooklyn Atlantis are taking on our sister super-fund waterway, The Gowanus Canal with the Gowanus Voyage, an interactive public boat pond on the Gowanus Canal in which you can explore above and below the surface of this historic waterway by piloting miniature remote control boats and aquatic robots equipped with video cameras and environmental sensors. Gowanus Voyage will take place on Saturday, July 20th, from 1pm-6pm at the 2nd Street boat launch near Bond Street in Brooklyn and is presented with the support of the Gowanus Dredgers Canoe Club. The rain date will be Sunday, July 21st.

This article made possible by a donation to our Writer’s Fund from local reader donations!

Things are looking up for the North Brooklyn Boat Club.  Even a hurricane couldn’t wipe the polish off their first year in the water, which took the group from mere plans and papers to a modest 20-vessel navy regularly plying the local waters.  On April 2nd the group met again to kick off their second season as a fully-operational club, and the message of the night was simple: let’s get more butts in boats.

The key points made at the meeting all supported this theme.  Membership fees are effectively reduced by $20 for the year: last year members were asked to contribute $30 to the club and needed a separate $30 membership to the American Canoe Association in order to be covered by that group’s trip insurance.  This year the club has a blanket policy with them so a $40 fee paid to the NBBC directly obviates the need for individual ACA membership.  Members were also encouraged to start down the safety training path that will result in access to club boats outside of scheduled group excursions, helping to foster a feeling of individual access to the water.  Finally, opportunities abound for individuals to get involved in a number of ways:  besides the obvious operational groups, subcommittees are working on gardening and green roofs for the space, woodworking and boat-building, and citizen science related to water quality and biology, just to name a few, providing niches for almost any related skill.

If you’re interested, there is still plenty of time this season to join up and get involved.  Check out their website, follow the group on the various social media, or just look for smoke coming from the waterfront fire pit and introduce yourself.