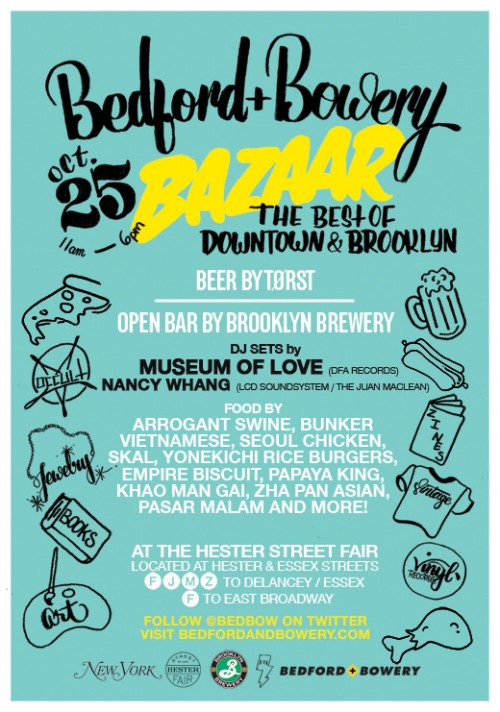 This Saturday, it’s that rarest of things: a really good reason to be in Manhattan on a weekend. Bedford + Bowery – New York magazine’s site covering North Brooklyn and Downtown Manhattan – is bringing together the best of both worlds for an outdoor festival of food, shopping and music. Come for the free beer (while it lasts!) from Brooklyn Brewery; stay for the beats by members of LCD Soundsystem; and sip still more exotic brews from Greenpoint’s own Torst, whose newly Michelin-starred chef Daniel Burns will be serving up duck sandwiches. You’ll also get to try Vietnamese grub from Ridgewood’s Bunker, Malaysian street food from Williamsburg’s Pasar Malam, Japanese rice burgers(!) from East Village’s Yonekichi, Icelandic stews from the LES’s Skal, Korean-American fried bird from the Seoul Chicken, southern grub from Empire Biscuit and lots more.

Rad vendors like Etsy NY will be selling vintage clothing, home wares, jewelry, books, and zines. For Halloween, Bushwick’s Catland has all your occult items and Greenpoint’s “Wizard of Odd,” Billy Leroy, will be staging a one-day-only comeback of his famous Houston Street antiques and oddities tent. There’ll be used records – and brand new vinyl from Greenpoint label Captured Tracks. And speaking of music! Your DJs for the day will be none other than DFA Records artists Museum of Love (featuring Pat Mahoney of LCD Soundsystem) and Nancy Whang (LCD, The Juan Maclean). It’s all FREE and happening this Saturday from 11am to 6pm at the Hester Street Fair, at Hester and Essex Streets on the LES. Find more info here and follow @bedbow for updates!

“I Was a Teenage Serial Killer”: Film Picks by Jay Hontsetter for Bedford & Bowery

“Sarah Jacobson was an independent filmmaker who believed wholeheartedly in feminism and punk rock, and fully embraced a DIY method of filmmaking. Before cancer cut her life short at age 32, she made some of the most influential underground films of the ’90s, including “I Was a Teenage Serial Killer,” ”Road Movie (Or What I Learned In a Buick Station Wagon),” and a feature film, “Mary Jane’s Not a Virgin Anymore.”

This Sunday, all three films will be screened at Spectacle Theater in Williamsburg.”