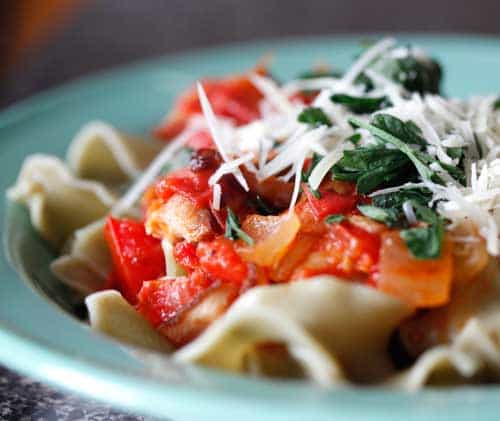 I am sorry but bitches just looks so good after Bacon Pasta. Let me tell you, hipsters aren’t the only nationality in Brooklyn that likes bacon! My Sicilian family goes crazy over this dish.

After Jon got out of the hospital, the doctors recommended no fatty food. The first meal my Dad Rocco made for him when they met for the first time was Pasta with Bacon. I was like, “Are you trying to kill my boyfriend, Dad?!”

He survived and loved it!

In Sicily, it’s called Pasta alla Matriciana (mah – truh- cha – nah). And it’s another easy half hour dinner. In Italy, they use Pancetta, which is Italian Bacon.

The pasta is a Spinach Parpardelle from Cayuga Pure Organics, which sells flours and beans on Saturdays in McGolrick Park. We picked up some delicious bacon from Brooklyn Cured who sells at the McGolrick Park Famers Market on Sundays. The fresh tomatoes are paste tomatoes, good for sauce, a special breed Sam from Great Road Farm is cultivating, but I can’t remember the name! Kewalo? Roma tomatoes will do. We are saving the seeds for next year. He told us they need to ferment a little before drying, so if they get moldy and stink, then it’s happening.

Cut up a package of bacon into chunks and fry it until crisp but still fatty. Remove the bacon. If there is a lot of fat, drain it so the bottom is just covered with grease. Fry one whole chopped onion with hot pepper flakes in the oil. After about 5 minutes add 4-5 chopped tomatoes. A can of chopped tomatoes will do. Salt and pepper. After about 10 minutes, add the bacon back into the pot. Cook for about 20 minutes. Use the sauce on top of pasta and top with fresh parsley and grated cheese. 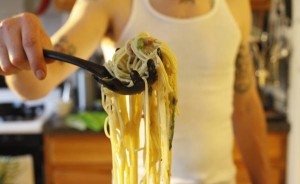 Jon has become the master of pasta carbonara, which is simply (italian) bacon and egg pasta. He got the recipe out of a cook book his mom gave us for Christmas called Weeknight Fresh & Fast.

I was skeptical at first because of an incident I had when making carbonara using duck eggs, very raw duck eggs, but Jon’s is just right. And he wears a wife beater just for me! 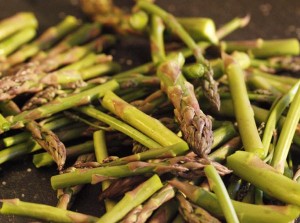 He put his own spin on this recipe with the substitution of asparagus, instead of kale, but the green possibilities are endless, broccoli rabe or brussells sprouts. I can’t think of any more.

This dish takes literally 20 minutes to make and is so delicious. By the time the time I put the laptop aside and ask him if he needs help, he is already finished. 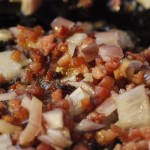 Cube 1/2 C. pancetta and pan fry it until brown. Add one chopped chopped shallot until softened, then 1 C. chopped asparagus. Add 1/2 C. of wine and reduce.

While all this is happening boil your spaghetti. Don’t ask how much. Just do what we do and make an entire pound for two people! I need to get one of those spaghetti measuring rings. Okay, like 1/2 lb? 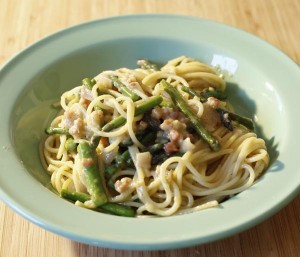 After the pasta is cooked, drain it and add it back to the pot. Add everything else to it and let it all get happy in there. Serve and enjoy!